Netflix have confirmed that they will be resurrecting Sense8 for a two-hour finale to resolve the cliffhanger the show was left on when they cancelled it last month. 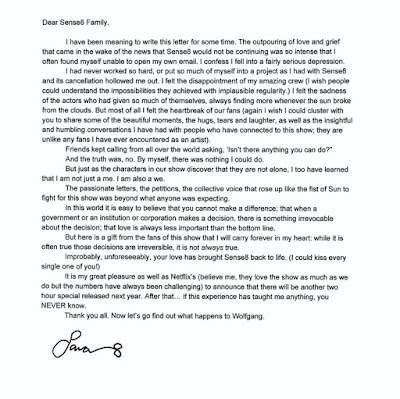 According to Netflix, the outpouring of fan support for the show had impressed them and made them reconsider their plans to simply dump the show where it was. The final two hours will resolve the unresolved storylines, most notably the fate of main character Wolfgang, who'd been taken prisoner by the sinister corporation that was seeking to exploit the sensates. The rest of the gang teamed up - in the flesh, for the first time - in London to help rescue Wolfgang and managed to counter-kidnap their old nemesis Whispers.

No word on a production or release schedule for the finale has yet been set.
Posted by Adam Whitehead at 18:54

There's no way they can tie up everything in two hours.

If anything they should at the very least ensure that every show they make has a proper ending before canceling. That's a major reason why I don't delve into certain shows. I don't want incomplete storylines.