Rick Grimes and his fellow survivors have found a new home in the town of Alexandria. The original inhabitants were organised but lacking in steel, not having seen off the challenges experienced by Rick and his companions. Having helped defend the town from threats within and without, Rick finds himself the de facto new leader of the community and has to take action against an imminent new danger: a vast horde of walkers located in a nearby quarry who are on the verge of breaking out and destroying the town. Beyond that, there are other threats lurking outside the walls, a band of raiders called the Wolves...and another, more mysterious group called the Saviors. 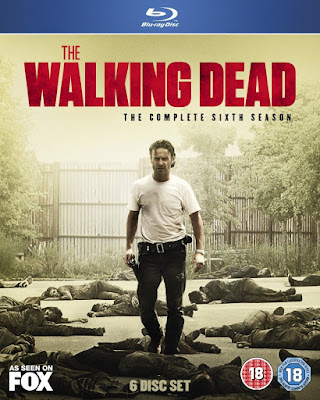 The Walking Dead is probably the most frustrating show on television (although it's also traded that title a few times with Game of Thrones in its most recent two seasons). It's beautifully shot, fantastically scored and has an outstanding cast of excellent actors. The writing and characterisation, however, is highly variable and the show's tone can go all over the place, from slightly cartoonish ultraviolence to gritty realism to funny character interactions and back again, often in a very clunky fashion. By far the show's biggest problem, however, has been pacing and structure. The series has had sixteen episodes per season since its third year, which is very generous by modern American cable standards, but it has struggled, sometimes excruciatingly, with filling that time with consistently gripping drama. From its third through fifth seasons, The Walking Dead has made wheel-spinning into an almost admirable art form.

For its sixth year, the show takes a different tack and one that is quite successful in solving this problem. The first half of the season revolves around two entwined events: Rick and his friends driving off a walker horde at the same time some opportunistic scavengers called the Wolves attack Alexandria. This results in a complex, two-front battle which becomes even more challenging when part of the horde splits off and crashes the party in town. This results in The Walking Dead's most action-packed storyline to date, with eight episodes of building tension, drama and all-out warfare. The series has often been criticised for sometimes forgetting there's even zombies around (although that was kind of Robert Kirkman's point, the zombies are merely the mechanism by which civilisation falls whilst he is far more interested in the social dynamics of reconstruction) but that complaint is certainly dismissed this season. The first few episodes of the show have our characters going to war, engaging the walkers in a full-scale, all-out offensive to save their new home.

It's all splendid stuff. The characters get their moments in the sun, Carol and Tara get new romantic partners, someone gives Daryl a rocket launcher and we're reunited with (slightly inexplicably) fan-favourite bit-player Morgan, who finally joins the cast full-time and gives us the possibly the show's most bizarre stand-alone episode in which he learns aikido from a random dude in the woods and his goat. This episode is gloriously insane, makes very little sense and seems to think it's very profound, which makes it awesomely enjoyable (if not quite for the reasons the writers intended). The first half of the season is The Walking Dead at its very strongest and most gripping, even if the decision to "kill" Glen and hide his fate for three episodes remains utterly moronic.

The second half starts going a bit wonky almost immediately. The end of the battle for Alexandria sees several characters introduced at the end of Season 5 brutally murdered apparently just to keep the cast costs down, which is less tragic than just annoying. Things pick up with a fantastic Daryl/Rick road trip episode in which they meet a charismatic new character called Jesus and then learn about the existence of a network of other settlements. At this point the show's allusions to the Fallout video game series (which have always been present, if not in the actual setting, then in the general post-apocalyptic tone) pick up as Rick moves from being on the defensive to gaining a view of a new civilisation arising from the survivors, that maybe they do all have a future. Having snatched away the possibility of a cure for the Turn in Season 5, The Walking Dead makes up for it by giving us a sliver of hope that maybe things will turn out okay.

There is, of course, a problem: the newly-contacted settlements are being extorted for food and ammo by a group called the Saviors. The show very nearly does something great here by having Rick and co immediately agree to attack them without actually talking to them first, which is a startlingly ruthless (and strategically unsound) move, and thus instigate hostilities. Unfortunately the series provides a get-out clause by revealing that they're the same group that attacked them earlier in the season (and had to be sorted out by Daryl and his rocket launcher), immediately giving Team Rick the moral high ground. This only increases when we get to meet the Saviours and discover just what a bunch of bad 'uns they are. Even so, the show makes some very interesting dramatic choices, such as having our first major interaction with the group come through a group of ruthless women who have sworn in with them, resulting in an unexpectedly feminist episode where they take Carol and Maggie prisoner and we're waiting for Rick to burst in and save them, but this turns out to be unnecessary because Carol and Maggie know how to take care of business by themselves.

So if the second half of the season falters compared to the first half, at least it's making interesting and original storytelling decisions, deploying its large cast of characters in dramatically compelling ways and keeping things ticking over nicely. And then it really all goes horribly wrong in the finale.

The Season 6 finale of The Walking Dead has been justly reviled by very large numbers of both critics and fans. One of the most interesting things about the Saviors before this point is that they're nasty and ruthless, but arguably not outright evil (their insistence on murdering one person as an example has to be countered with Rick's willingness to murder all of them without even knowing anything about them), and in fact seem to be what Team Rick were on their way to becoming given a few more months. The Saviors have some wins and losses, and seem to be a match for our heroes without totally overwhelming them (as, say, the Governor did initially). In the Season 6 finale the Saviors become psychic super-savants, capable of working out exactly what roads (ut of the utter maze of highways, back roads and side-trails sprawling outside Washington, DC our heroes are going to take and blocking them off expertly, building petrol-strewn barricades in minutes and knowing precisely where our characters will stop to get out of their truck to risk a cross-country run so they can set an elaborate trap. It's the most unconvincing, contrived bit of writing I've seen in years and is embarrassingly stupid. The silliness of this ending takes away from the introduction of Negan, the Saviors' much-foreshadowed leader, played with relish by the always-good Jeffrey Dean Morgan, and really reduces the impact of his ruthless execution of one of our heroes (not that you find out who that is until Season 7).

So the sixth season of The Walking Dead (****) is very nearly the best (and is certainly the best-structured and paced), but then makes a series of writing decisions throughout the season which are needlessly annoying, particularly its reliance on fake-out deaths. But as frustrating as it can be, The Walking Dead can also be, particularly in its quieter moments of just dwelling on the world after the fall, surprisingly atmospheric and thoughtful. The show's never-ending quest for consistency continues. The season is available now on DVD (UK, USA) and Blu-Ray (UK, USA).
Posted by Adam Whitehead at 22:09