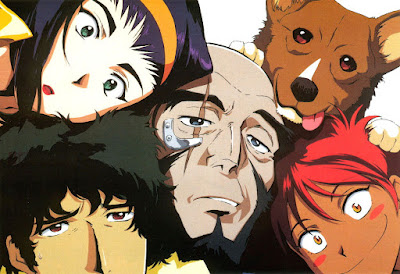 Set in 2071, the original series was set in a Solar system colonised in the wake of a devastating accident that left Earth uninhabitable. Humanity has scattered across the Solar system's moons and asteroids and the rule of law is precarious. Bounty-hunters known as "cowboys" help bring in criminals in return for rewards. The series follows the two-man, two-woman and one-genetically-modified dog crew of the spacecraft Bebop as they bring in criminals, explore their own pasts and set out to find their own destinies.

Based on a manga written by Cain Kuga and released in 1997, Cowboy Bebop originally aired as a 26-episode anime in 1998, with a stand-alone, follow-up movie in 2002. It has received blanket critical acclaim for its writing, voice acting, animation (from Sunrise Studios) and characterisation, as well as its highly-acclaimed, jazz-influenced soundtrack by Yoko Kanno. The show has been cited as a forerunner of both Firefly and The Expanse (for its relatively near-future Solar system setting).

The live-action version is being helmed by Tomorrow Studios, a new collaboration between the UK's ITV network and Marty Adelstein, the producer of Prion Break and Tru Calling. ITV Studios already have a large stake in the US reality TV market and this project, along with the Snowpiercer TV series, marks their first foray into scripted drama in the US. Sunrise Studios is on board as a production partner. It is unknown if the show will retain the skills of Yoko Kanno as a composer (although many fans are already citing this as a dealbreaker).

Tomorrow Studios are looking for a network to help bring the show to the air.
Posted by Adam Whitehead at 20:43