Netflix have cancelled Sense8 just two seasons into its planned five-season run. The news came as something of a surprise, as Netflix had opened negotiations with the cast to extend their contracts on the show just a couple of months ago, which was widely interpreted that they were looking at moving forward with a third season. There'd also been indications that a final decision would not be taken until August, allowing more time for discussions with the producers and writers. 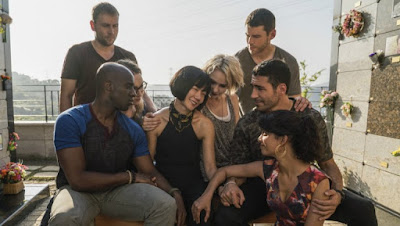 Sense8 is Netflix's most expensive show, with Season 2 clocking in at a reported $9 million per episode, vastly more (some say twice as much) as any of its tentpole Marvel Studios series. It's also far more than the likes of Stranger Things or Orange is the New Black. The only other Netflix shows in the same ballpark are House of Cards (a lot of which is actor fees) and the in-production Altered Carbon. Given that Sense8 reportedly drew much smaller audiences than any of those shows in the US, it's perhaps less surprising that Netflix decided to call it a day.

However, Sense8 has been a much bigger show in many foreign territories: a Season 2 storyline set in Sao Paulo was interpreted as a big thank you from the producers for making the show a massive success in Brazil, as well as several other South American countries. Given Netflix's plans to grow in international markets, the show was considered a boon for those territories.

A major stumbling block may have been the chaotic production of the second season. J. Michael Straczynski, one of Sense8's three writer-producers alongside the Wachowskis, played a much more key role in Season 1, bringing with him his sense of budgeting nous, getting maximum bang for the buck and pre-planning from shows like Babylon 5 (which often achieved end results more impressive than the contemporary Star Trek shows on about 40% of the budget). Season 1's budget was considerably smaller than Season 2's, even though in scope and scale it didn't look that much less. Straczynski played a much smaller role in Season 2's production and Lily Wachowski dropped out altogether, leaving production in the hands of Lana Wachowski. It appears that there was much more last-minute reshoots and even planning of entire sequences: the Sao Paulo sequence was apparently, written and shot at the last minute when the production realised they'd be able to fit in a shoot during the city's Pride march, despite the ballooning effect this had on the budget. There was also the recasting of one of the eight leads and much more elaborate fight and effects sequences, including an ambitious car chase on the streets of Seoul.

Netflix's renegotiations with the cast which seemed to be paving the way to a third season may suggest that Netflix was in fact willing to continue the show if the spiralling budget was brought under control and reduced, perhaps with a reduction in the number of countries and cities that were being filmed in. It may be that the producers were unwilling to consider such a move. Alternately, Netflix may have deemed the early streaming figures for Season 2 to be too disappointing to continue, although in this case they may have to take the blame themselves for a strangely lacklustre and underwhelming marketing campaign: Netflix blanked adverts for their latest (and very cheap) breakout show 13 Reasons Why at the time when Sense8's second season was released with barely a whisper.

It remains to be seen how Straczynski and the Wachowskis plan to wrap up the story left dangling at the end of Season 2, although comics and novels are possibilities. Due to the high budget, a move to another station or channel seems extremely unlikely.
Posted by Adam Whitehead at 20:55

I don't think this should come as a surprise. I like the show but anyone who knows of the production troubles of season 2, when they had to change one of the main cast members, could see this coming. Add that to the high cost and the ratings of the show, and the cancellation is not a surprise.