Scott Pilgrim vs. the World

22-year-old Canadian slacker Scott Pilgrim faces ridicule from his friends and bandmates when he hooks up with 17-year-old high-schooler Knives Chau. However, his life becomes infinitely more complicated when he dumps Chau for enigmatically cool American girl Ramona Flowers. Flowers' seven 'evil exes' have decided that Scott must defeat them all in order to date Ramona. Scott is forced into seven battles of escalating difficulty as he tries to win Ramona's heart and make amends for his rough treatment of Chau. 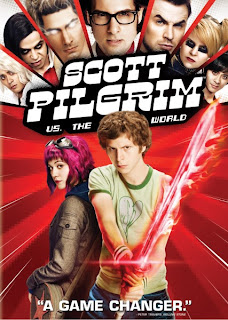 Scott Pilgrim vs. the World is an interesting film. It's a full-scale, all-out assault on the viewer's sensibilities, with radical shifts of tone and pace as the film moves from what appears to be a grounded comedy with some geeky overtones to a flat-out fantastical cartoon-made-flesh, with characters levitating through the air and unleashing 'demon hipster chicks' in battle, before shifting back to an intense relationship drama for five minutes before side-shifting into a bloodless Tarantino movie. In many ways cool, but it makes for an at times uneven film.

The movie is directed by Edgar Wright, who previously helmed the flicks Shaun of the Dead and Hot Fuzz and the TV series Spaced. This film marks his first major work without the partnership of Simon Pegg (who was writing and filming Paul at the same time; Pegg and Wright will apparently be soon reconvening for a third film). The film also marks Wright's first work with an American-sized movie budget: Scott Pilgrim cost ten times as much as Hot Fuzz and twenty times as much as Shaun of the Dead to make and every cent of it can be seen on screen. The visuals in the movie are kinetic, explosive and rich (multiple viewings may be required to take everything in), though never too confusing. The fight scenes are pretty good, and the choreography makes you believe that Michael Cera could kick some backside, which is an impressive achievement. As an action movie - the American Kung Fu Hustle is a comparison I've seen made - it works very well.

As a relationship drama/comedy it's more varied. It's not helped that central character Scott Pilgrim is rather unlikable. I know that's the point of both comic and film, but he doesn't really improve and become more likable over the course of the film, at least not until the last few seconds of the movie. Michael Cera is also pretty much just Michael Cera in the film, only really springing to life during the battles (particularly the bass battle, when he brings the required attitude) and the rest of the time doing his whiny indie actor spiel, which risks becoming tiresome. In a film full of villains exploding into coins, music-summoned CGI dragons and people reincarnating after using an 'extra life', the most fantastical thing is that any of these women would find Pilgrim even remotely attractive.

Luckily, the rest of the cast is almost flawlessly excellent. Kieran Culkin is superb as Pilgrim's 'cool gay flatmate' who acts as his moral compass, whilst Anna Pill is suitably demented as drummer Kim (whose band introductions are among the funnier things in the film). Ellen Wong and Mary Elizabeth Winstead are both great as Scott's love interests Knives Chau and Ramona Flowers. Winstead hits the note that Cera fails to by successfully portraying a sympathetic character despite her many bad decisions and judgment calls.

The film also has a few nice ironic cameo appearances. Brandon Routh (the ex-Superman) and Chris Evans (Captain America/the Human Torch) play two of Ramona's evil exes, a rival bassist with psi-powers gained through veganism and a skateboarder-turned-action-movie-star. Both actors take the mickey out of their tough guy roles with excellent comic timing, not to mention Wright reusing the Spaced approach of getting characters to do things they don't want to by using the magic phrase, "There's girls watching".

Once you get past the great performances (a variable lead aside) and startling visuals, the movie is effectively a metaphor for characters having to confront the demons of their past and not let bad history restrict the potential for happiness in the future. Or something along those lines. It's also a crazy action flick with tons of excellent geek references which will appeal to those who know what Scott Pilgrim is talking about when he references the bassline to the theme tune for Final Fantasy II (which I believe is actually Final Fantasy V, but given a different number due to...sorry, getting off-topic there) and where the beautiful 'L word' is 'lesbian'.

Scott Pilgrim vs. the World (****) goes on a little too long and towards the end becomes repetitive (I think it might have worked better with five evil exes), and Wright's visual brilliance becomes a little over-manic when not restrained by a stronger writing partner like Simon Pegg, but overall this is a fun and frantic movie with strong performances and an offbeat sense of humour. The movie is available now on DVD (UK, USA) and Blu-Ray (UK, USA).
Posted by Adam Whitehead at 10:55

Email ThisBlogThis!Share to TwitterShare to FacebookShare to Pinterest
Labels: edgar wright, scott pilgrim vs. the world

i agree with your resumé.
it really shines, but there some moments that really are too brightly coloured and almost hurt for their over-the-top style. but its a good movie with some weaker minutes towards the end...

by the way. chris evans has not a "cameo". he is an actor who plays a role ;)

I agree about cutting out some of the battle scenes. The movie was 112 minutes long, but it felt like 3 hours and really dragged at the end. I hope this doesn't impact Wright's career too badly -- according to imdb the movie lost about $30 million.

Probably one of the best movies ever made. It was best movie of 2010 by a mile!!

I agree with your analysis, very weird, loads of promise, could have done with losing some of the battles.

The bass line is from the very beginning of battles in Final Fantasy IV, which was re-titled Final Fantasy II when it was first released in the U. S. and Canada. Most people who played it in it's original form over here still refer to it as II.

As has been mentioned before about these "cameo" appearances, have you actually watched the film? Otherwise, you would know they play actual characters in the film, they are not just in there for a random encounter.

Interesting. I've always seen and used 'cameo' to mean 'an appearance of a reasonably-well-known actor in a small role', not just an uncredited easter egg appearance. Routh and Evans both have 'small roles' in that they are in the film for about 10 minutes each and then bow out, though they are credited actors playing full roles in the movie.

Turns out I was wrong. You learn something new every day.