Peace has endured on the world of Jijo, where six races shelter from the wider civilisation of the Five Galaxies, for decades. That peace has now been shattered by the arrival of a starship of the Jophur, a powerful Galactic race, searching for the fugitive Terran exploration vessel Streaker and the billion-year-old secrets it contains. As members of the six races struggle to survive under the brutal Jophur occupation, the crew of the beleaguered Streaker realise they must draw the Jophur away from Jijo and its innocent population, even if the cost is their own destruction... 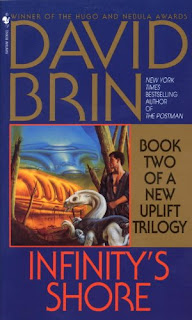 Infinity's Shore, the fifth and penultimate book in David Brin's Uplift Saga, picks up moments after the end of Brightness Reef, with the arrival of a Jophur warship spelling disaster for the refugee nations of the Slope. The opening of the novel successfully gets across the scale of this chaos, with the Jophur brutally 'altering' the traeki ambassador Asx with the imposition of a master ring (traeki are gestalt entities consisting of independently intelligent rings which combine to form a sentient being; Jophur have a 'master ring' which dominates and controls the others), slaughtering some of the inhabitants ruthlessly and then engaging in clandestine negotiations with criminal elements to try and splinter the six races from one another. We briefly met the Jophur in Startide Rising, but Infinity's Shore delves much more deeply into their characters and we discover how unpleasant they can really be. This is emphasised by an interesting narrative device, where the first-person musings of Asx in the previous novel continue, but now under the aegis of 'Ewasx', the same being now perverted into a full Jophur. This gives us a somewhat schizophrenic POV character who is desperately trying to keep his other intelligences under control through the application of pain, which is an original, if dark, idea. Brin's writing skills here are first rate, as Asx continues to be a character in his own right, and the reader has to puzzle out what he is up to under Ewasx's very nose (or olfactory ring sense organ, more accurately) through limited information.

Elsewhere, the novel unfolds across a number of POV characters. The purpose of the very large cast of the first book is now revealed, as the events become even more epic. Different factions choose to fight or side with the Jophur on a large scale, whilst a few characters are now revealed to be in contact with the crew of the Streaker. We also get additional POVs from the crew of the Streaker as we learn what they've been up to since we last saw them blasting free from the Kithrup system in Startide Rising. It's a complex structure that sometimes threatens to become ungainly, but Brin maintains the cohesion of the narrative, and he admirably finds time to drop in a few POV chapters that are not strictly necessary but are there to provide atmosphere and colour, showing the scale of the unrest triggered by the arrival of the spacecraft.

Infinity's Shore manages to escape 'middle book' syndrome due to is structure: whilst there is a further book to come, Heaven's Reach, Infinity's Shore successfully wraps up most of the storylines on Jijo, and the planet is (somewhat regretfully, as Brin's worldbuilding skills here are impressive) left behind at the end of the novel as the focus switches squarely to the crew of the Streaker. This gives us a lot of endings and conclusions at the end of the book, with only a couple of cliffhangers left for the next book (though these are quite large). 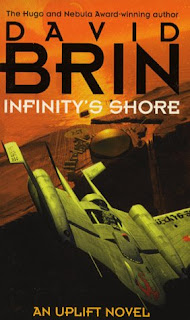 Brin's skills with characters are impressive, with Asx/Ewasx being the most notable, but we also get great stuff from Emerson (the semi-amnesiac human who has lost the power of speech due to torture but can still communicate through song), Alvin (the Arthur C. Clarke-loving hoon whose journal extracts drive part of the story) and Gillian (the commander of the Streaker following the events of Startide Rising), not to mention the return of a number of dolphin POVs which continue to be entertaining. Brin also successfully builds tension as Streaker tries to escape the Jophur, but in a manner that will also leave Jijo free from reprisals, and various plans are outlined and tested before one is found that might just work. There are also some great details on technology, such as the steampunk non-digital computer that one character builds, or the various genetically-engineered insects and other lifeforms of Jijo that have tasks programmed into them from millions of years ago that the refugees can suit to their own ends.

As the novel continues, Brin laces in hints that something much bigger is afoot. Markings on some of the ships abandoned on the ocean floor, abnormalities in the hyperspace transfer points approaching Jijo and some strange problems in the Galactic Library's historical record suggest something else is happening, something so vast it will utterly dwarf even the chaos and warfare unleashed across the Five Galaxies by Streaker's activities. This then leaves the reader eager to learn more in the final, monstrously cataclysmic novel in the series.

Infinity's Shore (****½) is an inventive, enjoyable and page-turning SF nove that rounds off a number of storylines from the preceding books and sets things up well for the grand finale. It is available now in the UK and USA.