In Search of the Trojan War by Michael Wood

The Trojan War holds a grip on the imagination like few other events in mythology. Part of the modern interest in the myth is due to the startling confirmation over the past century that Troy was a real place, located exactly where the legend puts it, with even minor details of topography from Homer's text backed up by archaeological evidence. This makes Troy a fascinating subject to discuss, but also a dangerous one: it's too easy to let the imagination run riot and conclude that perhaps the legend is a true story, that Agamemnon and Achilles were real people, and the survivors of Troy did go on to found Rome. 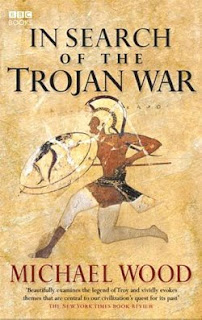 Back in the mid-1980s Michael Wood produced a TV documentary for the BBC based on the premise that the Trojan War was a real even that took place approximately in the 12th Century BC. This accompanying book and its later second and third editions expanded on the idea: Wood proposes that Troy was a client-state of the Hittite Empire that fell prey to a series of incursions into Asia Minor by the Greeks, at that time dominated by Mycenae. Mycenae was reaching the zenith of its power and in fact would soon face a rapid decline and collapse (plunging Greece into a more barbarous period which they would take some centuries to recover from). In one of its last expansions of power it tried to expand its empire into the Near East whilst the Hittites were distracted by clashes with the Egyptians, Assyrians and other neighbouring powers, and Troy was one of the cities destroyed in the process.

Wood outlines the 'discovery' of the site of Troy (a hill in Turkey a few miles from the Dardanelles called Hisarlik) by the early archaeologist Heinrich Schliemann in the mid-19th Century and the work by Schliemann and others in uncovering the site and other notable contemporary locations, including Mycenae itself. Wood describes the problems associated with these digs, which tended to be rushed and even destructive ("Schliemann has left us with the ruin of a ruin," he laments at one point) before later, more careful archaeologists could work on the sites. Accompanied by lavish illustrations and numerous photographs of the site (some modern, some from Schliemann's time), Wood describes in clear detail the problems presented by the fact that Troy is divided into 'layers', with the city inhabited both before and after the time of the alleged Trojan War, and dating the war to the correct layer is problematic (both the sixth and seventh layers have been proposed as 'Homer's Troy', and both have issues fitting that conclusion).

After this, Wood expands the scope to incorporate the entire Eastern Mediterranean at the time of the 12th-13th centuries BC. This was a time of surprisingly frequent international relations: the Hittite, Egyptian and Assyrian rulers tended to correspond with one another directly (and, less frequently with their more distant Mycenaean neighbours) and trade flourished between their nations (with wars - even large ones - put down as minor and temporary disagreements, soon mended). Amusingly, there are even surviving tablets featuring the Hittite queen exchanging minor court gossip with King Ramses II, one of the greatest Egyptian pharaohs. Unfortunately, the record is frustratingly incomplete, and Greek-Hittite discussions over a troublesome matter in the west which resulted in military activity (a clash over the city of Wilusa, and notably the Greek of Homer's time doesn't use the 'W', meaning he would have called it 'Ilusa', which is close to 'Ilium') are particularly fragmented.

Wood describes the situation well, first exploring the archaeological unearthing of Troy and other important sites. He describes the work and research done that uncovered the Hittites, a mighty empire of the ancient world that had fallen so completely that evidence of its existence was only uncovered a century ago, and how they provided a 'missing link' that explained the balance of power of the time. Sites contemporaneous with Troy are explored and shared pottery remnants and tablets written in the same languages are used to trace a network of trade and political relations between cities and nations. Pottery and pictures of the time depicting siege engines as stylised giant wooden horses smashing down city walls provide clues as to the origin of the Trojan Horse legend. But every time a conclusion seems to drift into view, it's frustratingly snatched away by a gap in the records. 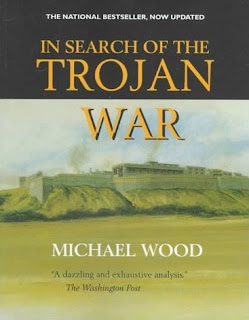 Woods' solution to this is to present 'scenarios' which he acknowledges are highly speculative but nevertheless credible. The problem is a lack of specific mentions or references to Troy in the historical record of the time. Wood suggests that the evidence supports a more widespread incursion into Asia Minor by the Greeks, with Troy as a minor sideshow at best, and this is supported by strong evidence that the Greeks had an enclave on the shores of south-western Anatolia around the city of Miletus. However, the evidence that the Greeks launched attacks in north-western Asia Minor is much more limited.

This is the book's greatest weakness: whilst discoveries at Troy, Mycenae, Knossos and in the old Hittite ruins have resulted in some spectacular revelations over the last century, and expose a fascinating and more complex world than Homer suggests, they also stop short of giving us enough data to draw solid conclusions about the Trojan War. Wood seems to reluctantly agree with this in the final assessment: that having gone in search of the Trojan War, he can only prove that it could have happened, but no more than that. But the uncertainty allows for the myth of the Trojan War to yet live on, awaiting more archaeological discoveries to illuminate the time.

In Search of the Trojan War (****) is a well-researched book that succinctly (in less than 300 pages) provides an overview of the archaeological history of the region and allows Wood to present the evidence for his broad conclusions about the period. Occasionally he gets drawn a little too far down the path of 'speculative' musings rather than sticking strictly with the evidence, but these musings are well-signposted in advance. The book is available now in the UK and USA.

Email ThisBlogThis!Share to TwitterShare to FacebookShare to Pinterest
Labels: in search of the trojan war, michael wood

Adam, like you I agree that Michael Wood's book poses some brilliant question regarding the Trojans. But, I still believe that Thucydides' History of the Peloponnesian War is still the definitive work on the subject.

While I thought the TV series was great, I don't really love the subject matter enough to get in to a book this in-depth.

Glad to know it's good, though, I'll consider it read by you on my behalf :p

I'll have to pick this one up. I really enjoy Michael Wood's PBS series "In Search of Myths and Legends"

I was found of the tv series but the book is even richer and more interesting. fans of the series should buy the book.
Could anyone tell me which of these 2 covers is the newest book version? Thanks.