The Halfling's Gem by R.A. Salvatore

The Companions of the Hall have successfully located Mithril Hall, the ancestral home of Bruenor Battlehammer and his clansmen. Unfortunately, the quest was completed only at great cost: Bruenor was lost in combat with the shadow dragon Shimmergloom and the halfling Regis was captured by the assassin Artemis Entreri. Entreri is now taking his prisoner back to the great southern metropolis of Calimport, leaving Drizzt Do'Urden and Wulfgar with no choice but to pursue them, whilst Catti-brie organises the armies coming together to retake Mithril Hall. The pursuit is long and dangerous, and Drizzt must decide whether the recovery of his friend is true motivation, or the knowledge that Entreri is the first warrior to have ever matched him blade to blade, and how eagerly he seeks a rematch. 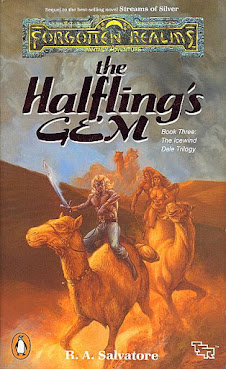 The Halfling's Gem (1990) wraps up R.A. Salvatore's first fantasy series, The Icewind Dale Trilogy. The Crystal Shard had introduced the world to the dark elven ranger Drizzt Do'Urden and his companions and Streams of Silver had given them an epic, Tolkienesque quest to undertake. This concluding book sees them divided and hot on the heels of one of their kidnapped fellows, a scenario ripe for pulp fantasy adventure, and that's what we get. Drizzt and company visit the grand cities of Waterdeep, Baldur's Gate, Memnon and Calimport; engage in all manner of hijinks on the high seas; and are then pitched into battle with a shadowy thieves' guild and its allies, a mixture of wizards, giants and wererats. It's mostly splendid fun.
By this third book, Salvatore has become a reasonable writer of straightforward action adventure and delivers an entertaining book in that mode. It does feel like he has larger aspirations to write an engaging travelogue of the Sword Coast (the west coast of the main Forgotten Realms continent of Faerun and the focus for many of the works in the setting), and in that respect falters; 320 pages isn't really enough time to do that and  both Waterdeep and Baldur's Gate get decidedly short shrift in this book. Calimport is more fully fleshed out, but it's questionable to what extent Salvatore consulted the source material: the city's distinction of being divided into many dozen drudachs or subdistricts, each walled off from its neighbours, is not mentioned at all. As a result the unique character and flavour of Calimport is lost (Salvatore is also smarter than to rely on Arabian stereotypes for the city or Calimshan as a whole, although one hapless Memnon merchant does start leaning in that direction).
Characterisation remains reasonable and Salvatore explores some interesting ideas, such as Drizzt using a magical mask to pass as a surface elf and avoid the racist appraisals of his character stemming from his skin colour alone, and facing a crisis of identity as a result. Drizzt also has to face his motives for dealing with Entreri, and whether these stem from a desire for revenge, a desire for a rematch with a worthy foe or a genuine desire to save his friend Regis. Wulfgar also gets a fish-out-of-water storyline as he finds himself trying to survive in civilised surrounds for prolonged periods for the first time, and we meet a few more characters who will become important in future volumes of the wider Legend of Drizzt series, such as Captain Deudermont and the crew of the Sea Sprite.
On the minus side, there isn't much. This very much remains an action-focused, fast food meal of a fantasy novel and is enjoyable on that level, but those looking for a deeper, richer experience best look elsewhere.
Otherwise, The Halfling's Gem (***½) wraps up this trilogy reasonably well. From this book readers can go back to experience Drizzt's backstory in The Dark Elf Trilogy or press on to find out what happens to the Companions of the Hall and Mithril Hall next in the Legacy of the Drow Quartet (I'd strongly recommend the former). The book is available now in the UK and USA.
Posted by Adam Whitehead at 14:12

This book will always have my respect as the kind of story that can literally send the party to hell and back again. Some fantasy epics have overpowered characters, but this one is at the high end of what I think is cool but still believable. But on the cons side this story is very clearly a D&D adventure, and the plot and characters are unbelievable outside of that context. Lastly, the confrontation between Drizzt and Artemus Entreri is excellent, but spoiled with the knowledge that these two are going to fight again and at least 20 more books. I don't know when precisely this relationship jumps the shark, but it would have been really nice to end it on a high note here, and let Drizzt develop another foil or rival. I'm not opposed to the idea of a long-term antagonist, but it's boring to have two characters fight it out in book after book with no final resolution.