The Goblin Emperor by Katherine Addison

The Emperor of the Elflands has been killed in an airship accident, along with his immediate sons and heirs. The imperial crown falls on his youngest son, Maia, who has lived in effective exile. Ignorant of the politics of the Elflands and the ways of the court, Maia has to learn whom he can trust and how to navigate the channels of government, all the while trying to find out who killed his father and brothers, and why. 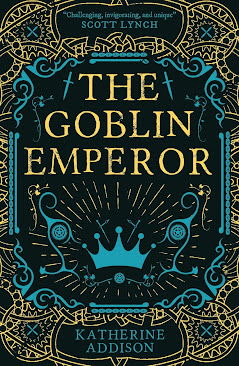 Originally published in 2014, The Goblin Emperor was a moderate hit for its author, Sarah Monette. Monette had already published or co-published six novels under her own name, but chose to adopt a new pen name to differentiate this work.

The Goblin Emperor is a work heavy on political intrigue and courtly manners and light on action. The story takes place in a well-realised fantasy world, but is constrained almost entirely to the imperial court, with the reader hearing about goings on in faraway places only through reports, rumours and hearsay. Those looking for a traditional epic fantasy with lots of travelling, sword fights, awesome displays of magic and epic battles best look elsewhere, but those who are looking for a well-written, in-depth character study will find much here that is rewarding.

This is a novel of manners, where characters behave and comport themselves through strict protocols which sometimes make it hard to discern their true motivations. Maia's job is to sort through the restrictions of hierarchy to work out who is an ally, who is an enemy and who is an enemy posing as a friend, and who is a friend who feels it impolite to impose themselves on the emperor. It requires a deft hand at characterisation to make this work, but the author succeeds in making these characters rise through the layers of formality and work as fully-fleshed-out individuals.

The book makes much of language and terminology, a bit oddly for a book that also uses fairly generic terms like "elf" and "goblin," although these don't seem to be describing the traditional fantasy races but merely different ethnicities of humans, similar to the witches, goblins and demons of The Worm Ouroboros (who are actually just different types of human). There's a complex system of address, titles and styles which occasionally means the same character may be referred to in several different ways and even by different names. This doesn't happen too often and from context it's relatively easy to pick up on who's who, but it does occasionally briefly disrupt the flow of the story as you try to work out if this character is someone we've met before.

The downside to all of this is that the pace is "relaxed" and occasionally risks being "languid," with major plot movements slow to develop and having to occasionally bulldoze your way through a dozen pages of Maia musing on dining etiquette and what is the acceptable level of formalwear for the next event he has to attend. If you're looking for a fast-paced, exciting book, this is definitely not it.

The Goblin Emperor (****) is an intelligent, thoughtful and slow (sometimes a tad too slow) book, well-written and solidly-characterised with a strong background. The novel lacks a certain dynamism but makes up for it with the richness of the setting and characters. The book is available now in the UK and USA.

This is a remarkable book, though as noted very slow. I was impressed by how it plays with traditional fantasy tropes. Maia, is a fairly normal person, and a moral human being who has suffered greatly before being unexpectedly elevated to emperor. And he tries to govern justly and treat people with respect despite constantly having to navigate a political minefield. This makes him most unlike traditional fantasy protagonists, who have a destiny, or special gifts of intelligence or physical prowess, or are impossibly good and noble for their circumstances. I really enjoyed the fact that Maia is none of these things, and the world and the characters were often complicated and nuanced and gray, without extremes of evil or goodness.