Hasbro's Hero Quest relaunch crowdfunding campaign has launched in the United Kingdom, thanks to a partnership with UK retailer Zavvi. 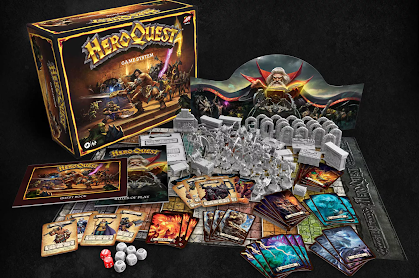 Hasbro unveiled their reboot of the game on 22 September with a crowdfunding campaign via their HasLab crowdfunding service. The game sailed past its target of $1 million within a few hours and is currently just short of $2 million. The success of the crowdfunding campaign means that the game will ship with two expansions, extra miniatures (including alternate-gender versions of all characters), more dice, one brand new character type and a whole new, second campaign from the original creator of the game.

Currently included in the "Heroic Tier" is:

The "Mythic Tier" comprises all of the Heroic Tier and in addition (so far):

There are further bonuses which are waiting to be unlocked (for no extra charge), which no doubt the influx of new European orders should help with. The known extra unlocks so far comprise:
There are a few weaknesses, though. Zavvi are offering the Mythic Tier only, not the standard Heroic one. Although Zavvi's small print insists that the campaign is open for European backers as well, some EU-based fans had noted that they haven't been able to get the system to accept their overseas addresses. There is also some exchange rate shenanigans: the Mythic Tier in the US crowdfunder is $150, which translates to £116.10 as of this morning, but the UK cost via Zavvi is £150, which feels a bit cheeky. That is, however, still cheaper than backing the US campaign and importing the game to the UK manually.
Some may also balk at the price for what is effectively a reprint of a 31-year-old game, albeit with all-new models, especially as some of the things fans have most requested, such as modernised rules, are not yet unlocked. The Mythic Tier is considerably more expensive than a copy of Gloomhaven which, although it has far fewer miniatures, certainly has more gameplay depth and much greater longevity.
Still, nostalgia is a powerful thing and I suspect the campaign will continue to do well. It runs until 6 November with delivery anticipated for late 2021.
* The 8 heroes comprise the Barbarian, Elf, Dwarf and Wizard in both male and female variants.
** For copyright reasons, "Dread" is the term that replaces "Chaos" from the original game.
*** Also for copyright reasons, "Abominations" replace the Fimir from the original game.
Posted by Adam Whitehead at 12:39

I have the original. Got it for my boys last Christmas as a present from Santa. I don't think I'll go for this.....might check our Gloomhaven.