The war for Nassau and the Bahamas takes a surprising turn when a devastating trap leaves the pirate coalition in tatters and the pirate leaders scattered. Governor Woodes Rogers celebrates his triumph but knows he cannot rest easy whilst his defences remain shattered and Flint, John Silver and Blackbeard are still at large. The two factions continue to jockey for position, seeking out unlikely allies and determined to win the struggle, no matter the cost. 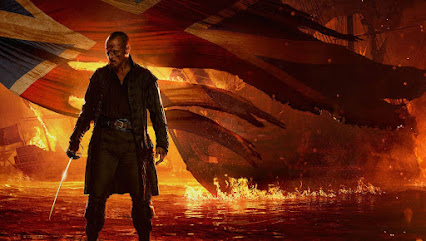 The secret to the success of Black Sails has been in its joyous mixture of bawdy action with intriguing politics, against a semi-historical backdrop and related through superbly-played, relatably human characters. For three seasons, the writers kept up a constantly-shifting patchwork of alliances of convenience and the balancing of short-term pragmatism against long-term ambitions, and did so with finesse and skill.
In its fourth and final season, Black Sails does nearly stumble in its last dance. We've seen so many betrayals, treacherous sneak attacks and unexpected reversals that seeing a bunch more risks becoming predictable. The real enemy is trying to undercut the pirates by making Silver and Flint turn on one another? Is it Tuesday again? Long-term strategic success is endangered by small-time villains who can't see beyond the end of the week? We've been here before, several times, and the returns are starting to diminish.
At least, this is the problem that blights the first half of the season. The second half, with the writers fully aware the end is in sight, sees them ratcheting up the tension superbly. Breaks in trust are now irrevocable, reversals can see major characters dead rather than imprisoned or wounded, and the stakes have been raised so high by both sides (with Rogers even willing to commit treason to get what he wants) that there is no possibility of quarter or forgiveness. The show even remembers its original pitch as a prequel to Robert Louis Stevenson's novel Treasure Island, as events in the back half of the season begin to converge on the opening of the book.
As usual, the cast does absolutely exceptional work. Toby Stephens has been superb throughout but reaches new levels in the buildup to the finale, whilst Luke Arnold and Tom Hopper, who started off very much in his shadow, are now his equals. Bear McCreary's soundtrack is superb, the CG teams continue to orchestrate stunning Master and Commander-beating naval battles on a far tinier budget and overall the production remains impressive.
Apart from a couple of repetitive storylines its opening episodes, the final season of Black Sails (****½) maintains the quality of the previous seasons through to the end. It has been common to compare Black Sails to Game of Thrones due to their mutual marriage of impressive action to compelling characters and intriguingly murky politics, but ultimately Black Sails overhauls its fantasy forebear by doing what it could not: sticking the landing and delivering a finale worthy of any number of mixed metaphors. The show is available to watch via Amazon Prime in the UK and in the USA via Starz.
Posted by Adam Whitehead at 15:18

Thank you for reviewing the 4 seasons of Black Sails, Adam. This is a really good tv series and I hope more people will discover it thanks to your coverage. The soundtrack is absolutely marvellous (best soundtrack by Bear McCreary, even better than Battlestar Galactica in my humble opinion) and I hope that the music of season 2-4 will be officially released one day.