In addition to the long-gestating live-action film, Hasbro have announced they are developing a Dungeons & Dragons TV series. 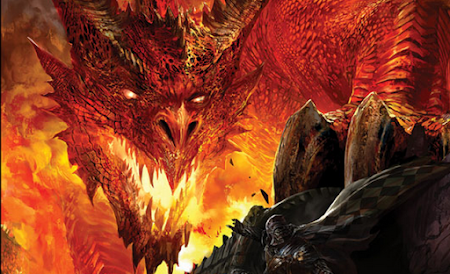 Dungeons & Dragons is the longest-running and most popular roleplaying game in history, having sold more than 20 million rulebooks and well over 100 million novels and 10 million video games since 1974. It is estimated that more than 50 million people have played the game. The current fifth edition of the game, released by Hasbro subsidiary Wizards of the Coast in 2014, is the most popular in the game's history. Hasbro has confirmed that 2019 was the biggest-selling year in the franchise's history (including its early days) and for 2020 the game is currently on track to break that record by over 20%. Hasbro attribute this to the popularity of the game in lockdown and that families are now playing the game together, as well as the more traditional friend groups. Online campaigns over Zoom, Facebook Video Messenger, Skype, Roll20 and other services have also grown significantly this year.

Hasbro are developing the film project with Paramount, with Jonathan Goldstein and John Daley (Game Night, Horrible Bosses, Spider-Man: Homecoming) set to write and direct and Jeremy Latcham (the Marvel Cinematic Universe) set to produce. However, Hasbro have been keen to expand the franchise into a shared universe similar to the MCU. Whilst everyone and their aunt has been trying to do the same thing with other properties, Dungeons & Dragons is uniquely placed to be commercially exploited in such a fashion, as the tabletop game, video games and the novels already span a large number of worlds, storylines and distinct casts of characters, with some scope for crossover but mostly consisting of stand-alone narratives. For example, the well-known Dragonlance, Forgotten Realms, Dark Sun, Greyhawk and Ravenloft worlds are distinct, separate settings within the same universe (linked by the wider Spelljammer and Planescape settings, which depict space travel and interplanar travel respectively).

According to Hasbro, they have been in discussion with both streaming services and standard cable and TV networks over a D&D-branded TV series. It sounds like the project is in its earliest stages and will require a strong partner to commit before moving forwards. I can imagine Netflix, Amazon, HBO and maybe a few other companies being at least somewhat interested in the project, but we'll have to wait to see who bites.

Hasbro are having a tough time in other areas at the moment, facing a $10 million lawsuit from superstar authors Margaret Weis and Tracy Hickman for allegedly breaching a contract by refusing to publish a new Dragonlance novel trilogy for reportedly spurious reasons. The outcome of that suit remains to be seen.

Email ThisBlogThis!Share to TwitterShare to FacebookShare to Pinterest
Labels: dungeons and dragons, hasbro, news, paramount, wizards of the coast

Is it gonna be a series about a D&D setting or about people playing D&D?

This is interesting. They could screw it up in so many ways :-) They would do best to pick a campaign setting, whichever one they pick is fine, and stick to it, rather than go the Disney route with the sequel trilogy and create an IP that nobody cares about and has no existing fan base. What they'll do if they're smart is to create some sort of synchronism between the show as it's acted out, and how players would role play the same characters. If they consciously followed the rules they could create a really interesting space online to debate different visions of the same character and what does and doesn't work in terms of role-playing. But to do that you need writers who actively play D&D, or they wouldn't know what to write for or the concerns The gamers have. In any case this is much more fun and open it's a numerous possibilities that go beyond the typical movie, that frankly no one will watch. I could be wrong and there could be a big D&D movie series eventually, but gameplay doesn't resolve itself neatly into 2-hour increments. And there's infinitely more space to be adaptive to fan concerns with TV than film.

It is absolutely unbelievable that they have not used this IP for some sort of TV series in the last few years with all the technology and the popularity of things such as Game of Thrones, LOTR and others. well they need to hurry up and get to it and make it happen.