In a slightly confusing move, Universal is pressing ahead with a Battlestar Galactica movie project at the exact same time it is developing a new television series, via NBC's Peacock service. 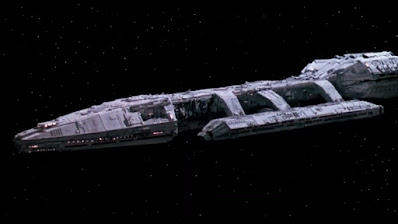 Simon Kinberg - the writer of X-Men: Apocalypse, Dark Phoenix and X-Men: The Last Stand who inexplicably keeps getting work - has been hired to co-produce and write the film. Dylan Clark, who has helped mastermind the highly successful Planet of the Apes reboot series and is currently producing The Batman, will work with Kinberg on the project.

The new BSG film will be a ground-up reboot of the classic premise, which sees the humans of the Twelve Colonies suffer a brutal attack by the robotic Cylons and forced to flee into space in search of the mythical "Thirteenth Colony" of Earth.

The Peacock project is being produced by Sam Esmail and Michael Lesslie. Esmail originally planned a show that intersects with the TV version of the franchise produced by Ronald D. Moore in 2003-09, but since taking a back seat on the project, it sounds like Lesslie is also pursuing a reboot of the premise.

The idea of two versions of the same story being in production at the same time feels weird, but not completely unprecedented. There are no less than three adaptations of Resident Evil in pre-production, all set in different universes: a live-action, post-apocalyptic Netflix show; a live-action new film based on the first two video games; and an animated film taking place in the video game timeline. Paramount are also planning to relaunch their Star Trek film series with movies set in a different timeline to the TV shows currently underway at CBS All Access.

The BSG movie project is not guaranteed to move forwards. Universal have been developing a new film version of the franchise since the Moore TV show wrapped in 2009. Bryan Singer worked on the project for a couple of years (having previously been attached to a TV version pre-Moore), whilst writers Jack Paglen and Lisa Joy also took tilts at the script. France Lawrence was also attached to direct at one point, but has since dropped out. The problem is likely tied to the budget, with the premise requiring a hefty cost but the profile of the franchise (even the much-praised, multi-award-winning Ron Moore version still only has a cult following) meaning it's difficult to justify a large expense.

More news as it develops.

Swapping out Ron Moore for Simon Kinberg. What could go wrong?

This really plays to the absurdity of Hollywood. Battlestar is bad 70s TV. Attack of the robots and humans on all the planets of the zodiac. Lame search for a mystical Earth. The Ronald Moore show attempted to complicate this, with some success. But it is in no way a great science fiction story. There have been a dozen or more sci-fi classic novels written since 1978 that feature infinitely more nuanced characters and world building. It's pretty sad that decision makers in Hollywood refuse to take a chance on any of these and keep recycling one mediocre idea that has never achieved more than a kind of middling, cult success. And I really don't think the third time is the charm. I mean come on. When, if ever, will the time come for million selling authors like Ian Banks, Alistair Reynolds, Peter f Hamilton, and a gazillion others to get a shot at a TV or movie series. Even a bad interpretation of one of these novels would take television in a New direction and allow for future innovation. But no, we must keep churning out more Star Wars more Star trek and more Battlestar, and we we're not supposed to think about it. Thank God for the Expanse. It's not perfect, but it and Altered Carbon are the only recent, semi-successes in bringing new and different science fiction stories to the small and big screens.