Spaced was a UK sitcom that ran for two seasons in 1999 and 2001 and was tremendously critically acclaimed at the time. The creative team subsequently moved into cinema, creating the hit movies Shaun of the Dead, Hot Fuzz and the forthcoming The World Ends, but Spaced remains by far their funniest and most rewarding work. 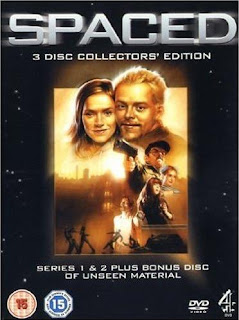 The series opens with aspiring comic book artist Tim Bisley (Simon Pegg) and workshy writer Daisy Steiner (Jessica Stephenson) both having to find a new place to live. Randomly bumping into one another in the local cafe, they decide to fake being a couple to rent a surprisingly cheap flat in London. The rest of the regular cast is rounded off by their landlady Marsha (a wine-swigging, ex-groupie single mum), Tim's best friend Mike (a failed soldier with a weapons fixation), Daisy's best friend Twist (who Tim sums up as being a "bit like Cordelia from Buffy the Vampire Slayer and latterly its spin-off series Angel, which is set in LA,") and Brian, the mildly pretentious artist (specialities: anger, pain, fear and aggression) who rents Marsh's basement flat.

It's a pretty traditional sitcom set-up, but Spaced differs from the average sitcom in two important respects. First, it is directed, shot and edited much more like a movie, with fast-cuts, segues, occasionally impressive special effects and the use of real locations (a nightclub sequence is actually filmed in a proper nightclub, for example, rather than a lame set). Secondly, the series is absolutely overflowing with movie, TV and comic references, some verbal, others visual, some subtle and some pretty outrageous. The DVDs come equipped with a 'homage-o-metre' which tracks these references as they fly past. The homage-o-metre almost explodes during Season 2 when Robot Wars, Fight Club ("No-one talks about Robot Club!") and One Flew Over the Cuckoo's Nest are all heavily referenced in just one episode.

What makes Spaced special is the way these elements are combined with some excellent writing and acting, particularly from Pegg and Stephenson as the leads and the brilliant Mark Heap as Brian (who went on from Spaced to win acclaim in a number of other Channel 4 comedy shows, most notably Green Wing). The comedic situations are also hilarious, such as Tim getting loaded on cheap speed and playing Resident Evil 2 for 12 hours straight, leading to him visualising the world as if a zombie apocalypse is taking place (this was the inspiration for Shaun of the Dead), or the gang's attempts to gatecrash their teenage neighbours' party turning into a Close Encounters of the Third Kind homage. There's also plenty of cameos from other comedians, with Little Britain's David Walliams playing transsexual artist Vulva and The Office's Ricky Gervais putting in a cameo as a slimy newspaper worker, whilst the irrepressible Bill Bailey steals every scene he's in as Tim's comic shop boss Bilbo Bagshot (who retains mild guilt about once punching his dad in the face for saying Hawk the Slayer was rubbish, instead of suggesting they watch Krull and compare the two).

The two seasons are linked by ongoing story arcs, although these are fairly low-key. Daisy and Tim having to fake being in a relationship to appease Marsha is a point revisited several times (leading to awkwardness when both end up in other relationships), whilst Mike is battling to be readmitted to the Territorial Army, having been thrown out after trying to invade Paris with a Chieftain tank. The second season is linked together by Daisy's employment problems, Brian and Twist's romance and Tim's utter hatred and loathing of The Phantom Menace, which lands him in hot water on several occasions (and gives rise to the legendary primal scream of, "BUT JAR-JAR BINKS MAKES THE EWOKS LOOK LIKE FU**ING SHAFT!").

Spaced (*****) lasted for just 14 episodes almost a decade ago, but remains one of the funniest, most entertaining sitcoms ever committed to screen. Even now rewatching certain episodes reveals more previously-missed homages to movies or comics, and the series seems to just get better with age. The complete series is available on DVD in both the UK and the USA. The US DVD edition is even more impressive, as it features guest-commentaries from the likes of Quentin Tarantino, Kevin Smith and Matt Stone.
Posted by Adam Whitehead at 02:45

Seems rather bizarre they have to fake being a couple to satisfy the concerns of a wine-swigging, ex-groupie who got herself knocked up.

That point, which they oddly never bring up in the first season, proves to be a major plot point in Season 2 (and is where Ricky Gervais' cameo comes in).

Mike's attempt to invade Paris failed when he was sidetracked by roadsigns leading to EuroDisney, and he was subsequently apprehended on Space Mountain.