The Conan Chronicles Volume I by Robert E. Howard

"Know, oh prince, that between the years when the oceans drank Atlantis and the gleaming cities, and the years of the rise of the sons of Aryas, there was an age undreamed of, when shining kings lay spread across the world like blue mantles beneath the stars. Hither came Conan, the Cimmerian, black-haired, sullen-eyed, sword in hand, a thief, a reaver, a slayer, with gigantic melancholies and gigantic mirths, to tread the jeweled thrones of the Earth under his sandaled feet."

Conan the Barbarian is one of the iconic characters of fantasy. Almost eighty years ago, he walked onto the pages of Weird Tales magazine and undertook many adventures in the Hyborian Age, ten thousand or more years ago when the world looked very different. Dozens of tales followed before Robert E. Howard committed suicide at a tragically young age. In the following decades the Conan tales were re-edited, revamped and new stories were written by authors such as L. Sprague de Camp and Robert Jordan. After fading from view after the early-1980s Jordan stories and the Schwarzenegger movies, Conan came back into the public eye around the turn of the century with a series of new collected editions intent on restoring the text to Howard's original standards. 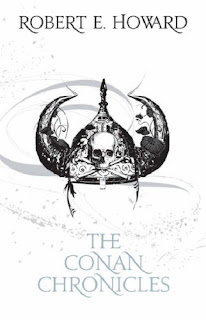 This first volume of Conan's adventures is arranged in chronological, not publishing, order and takes Conan from a teenager through a period of some years until he is an more experienced adventurer. Most of these tales take place in the south and east of the Thurian continent (prehistoric Eurasia), with Conan equally at home raiding exotic Arabic-esque temples for treasure as captaining a pirate warship or fighting as a mercenary alongside a mighty host. The stories have a somewhat familiar structure: Conan becomes embroiled in some nefarious activity, bulldozes his way through it with no regard for subtlety, and bursts out the other side, usually laden with gold and a willing young lady on his arm. You can certainly tell the ones that Howard wrote for money, whilst the highlights - 'Rogues in the House', 'The Tower of the Elephant' and the story that gives the first volume its subtitle, 'The People of the Black Circle' - are altogether more interesting, with a bit more depth or humour to them.

For stories written the better part of a century ago, these tales are fiendishly readable and feel much more readable and recent than, say, the work of Tolkien, although they lack JRRT's much greater resonance and depth. There's still a fresh vitality to these tales that makes them compelling. However, in other areas they are very much of their time: female characters are generally walking plot coupons for Conan to rescue or fall in love with. There are a couple of exceptions, but some readers may find it a problem. Another issue is that whilst there are some outstanding stories here, there are a few more that are formulaic, and a couple that are incomplete. That feeling of familiarity can be off-putting, and makes it hard to read the book in one go. I've been toing and froing between other books and these stories for the better part of two years. Like a rich chocolate cake, dipping into it occasionally may be healthier than trying to digest the whole thing at once. Still, it is hard to argue with any character who has a theme tune as badass as this one.

The Conan Chronicles Volume I: The People of the Black Circle (****) introduces us to one of fantasy's most famous and notable characters. The range of defiantly non-PC stories on display here may not be huge, but they are certainly a lot of fun to read. The book is available in the UK from Gollancz as part of the Fantasy Masterworks range, in a new edition and also as part of the complete Conan Chronicles volume. In the USA Del Rey currently prints Howard's original stories in three volumes, The Coming of Conan, The Bloody Crown of Conan and The Conquering Sword of Conan.
Posted by Adam Whitehead at 21:52

I have V.1 do you know when the 2nd volume will be released?

The second dragon, The Hour of the Dragon, is out now. I don't know if it's going to be published with the new cover style though.