The first volume in The Void Trilogy, The Dreaming Void, was an enjoyable novel but not up there with Peter F. Hamilton's best. The story took a little long to get going and the links between Edeard's story in the Void and of events in the Commonwealth felt somewhat disconnected. This second book in the trilogy is a much stronger book which sets things up nicely for the finale and ties the two narratives together much more strongly. 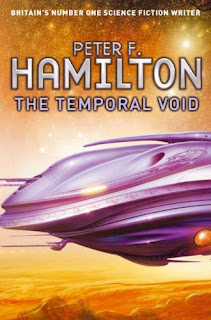 Picking up after the events of the first novel, the Greater Commonwealth is in turmoil. The Living Dream movement is assembling its Pilgrimage fleet, which it plans to take into the Void to begin a life of paradise and unity. Unfortunately, it seems likely that this will trigger a major expansion event within the Void, threatening the Galaxy with destruction. In order to undertake the Pilgrimage, the Living Dreamers must find the Second Dreamer, the human who is in contact with the Skylords who control the Void. Unfortunately, the Second Dreamer is a scared young woman who has no interest in becoming the new messiah to a fanatical movement whose followers number in the billions, and she goes on the run.

Elsewhere, the alien Ocisens are hurtling towards Commonwealth space, determined to destroy the Pilgrimage fleet before it can reach the Void. The Commonwealth's attempts to deter them reveal that the threat they are facing are of a far greater magnitude than previously thought, resulting in the calling in of some very big guns indeed. Characters from the Commonwealth Saga - such as Paula Myo and Oscar Monroe - are involved in investigating the apparent conspiracy by elements within the Commonwealth who want the Pilgrimage to succeed, despite the trillions of lives it could cost. Another returning character, Justine Burnelli, opts for a more direct approach when she decides to try to slip into the Void and negotiate directly with the Skylords.

However, the bulk of the novel takes place within the Void itself. Edeard, a young constable in Makkathran's police force, has been revealed as possessing extraordinary psi-powers beyond those of many of the inhabitants. As his abilities grow, so does his determination to bring down and destroy the corrupt gangs who hold the lower echelons of the city in their grasp. But, as he discovers, there are connections between the gangs and the city's rulers which makes his task thankless, uncomfortable and exceedingly dangerous.

The Temporal Void picks up from the ending of The Dreaming Void without a beat and ramps up the pace of events. This may be a novel that is over 700 pages long in hardcover, but the pages absolutely fly past. There may be SF writers who have more attitude (Morgan) or better and darker prose (Reynolds), but for the simple ability to tell a rattling damn good story and combine it with complex scientific ideas and make it all compelling, Hamilton can't really be beaten. Just to add insult to the wound, Hamilton also proves himself to have similarly good skills with writing fantasy in the Makkathran chapters, and once again the reader ponders what Hamilton would do with a pure fantasy story.

Complaints? Edeard's powers mean that the situations when he finds himself in jeopardy are not as dangerous as they should be, and a shocking series of events near the end (which are beyond GRRM's Red Wedding in making the reader's jaw drop and go, "What the hell?") are disposed of rather easily. There's also a rather awkward plot revelation near the end of the book that essentially relies on lots of characters not talking about something they all know about merely to keep the reader in suspense, which feels slightly artificial.

The complaints are pretty minor though. The Temporal Void (****½) is the most readable, compelling slice of SF published this year, and leaves the reader sitting on edge for The Evolutionary Void, which will conclude the story (due in early 2010). The novel is out now in the UK from Pan Macmillan in hardcover, and will be published by Del Rey in the USA in February.
Posted by Adam Whitehead at 21:46

Hi Adam,enjoying your reviews. I was also wtf at the events towards the end of Edeard's story but have to disagree with you that these were dealt with too easily. To me the repercussions for Edeard really started to tie the void sections with Living Dream's pilgrimage and comments that the 'present' day sections had made throughout. Can't wait for no.3.

I thought the ending was interesting, but it did do away with the power of the earlier sections when Edeard's life went completely wrong. However, it is possible that this is the set-up for a much bigger revelation (such as Edeard's fate and the details of Inigo's Final Dream) in the final book in the series.