By the time Babylon 5's second season ended, Warner Brothers in the USA seemed to be pretty happy with how the series was going. Ratings were solid and for a budget about half that of Paramount's Star Trek shows, they were grabbing a lot of TV headlines and magazine features that used to automatically go to Trek. For J. Michael Straczynski, Season 3 proved to be a challenge. Have set up a lot of storylines and characters in the first two years, it was time to start delivering the pay-off. Unfortunately, due to the sheer number of major, epoch-shaking events that had to happen this season he found it difficult to assign scripts to other writers, and was left with no option but to script all 22 episodes himself. Since he was also a hands-on producer, this proved to be a massive challenge, but one he successfully pulled off. 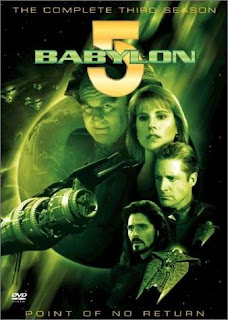 Season 3 picks up the story in the year 2260. The Centauri Republic is now on the prowl, its borders expanding and conflict erupting with the smaller worlds who make up its neighbours. Whilst Londo frantically tries to distance himself from his increasingly dangerous and unreliable allies, the Shadows, others in the Centauri court do not prove so wise. Elsewhere, the Earth Alliance is becoming divided, riven by paranoia and distrust fostered by the new Ministry of Peace and its volunteer Nightwatch division of informants. With the Galaxy slipping towards darkness and war, an ancient Minbari organisation, the Rangers, has been refounded to help guide the races back to peaceful coexistence, and a powerful new warship is put at the disposal of Captain John Sheridan and the crew of the Babylon 5 station to help them achieve this goal.

Season 3 of B5 starts off surprisingly slowly, with a number of stand-alone episodes. Whilst these ease viewers coming off a long break between seasons back into the show, when watched sequentially after Season 2 they diffuse a lot of the pace and tension built up at the end of that season, and it's slow-going getting back on track. These early episodes are unfortunately mostly filler, particularly the disappointingly shallow Convictions. Exogenesis shows signs of the writer trying to pull of a second 'revisionist Star Trek episode' approach (after the previous year's Confessions and Lamentations) but not quite nailing it. However, events take an upswing in what fans informally dubbed 'The Trilogy': Messages from Earth, Point of No Return and the award-winning Severed Dreams. These three episodes act as a pivot around which the entire series swings, with the crew of B5 finally taking a public stand for what they believe is right, culminating in one of the biggest space battles ever seen on the small screen. When the dust clears, our heroes find themselves in a very different situation to where they were before.

The remainder of the season sees the problems on Earth dropping into the background in favour of the growing conflict with the Shadows. JMS finally addresses the question of what the Shadows want, and how they plan to achieve it. Episodes like Ship of Tears sees the network of alliances and animosities shifting as a former enemy is personally affronted by the Shadows and agrees to work with the B5 crew in revenge, whilst Interludes and Examinations is a masterful look at B5's key central themes of redemption, consequences and responsibility. Things break down somewhat in the War Without End two-parter, which attempts to resolve the mystery of Babylon 4 established in the first season's Babylon Squared. A lot of things had changed in the plan for the series since then (not least Sinclair's departure and his replacement with Sheridan), and JMS was forced to explain the events of the former episode with a different set of circumstances and characters to what he had planned two years earlier. It just about hangs together, as long as you don't think about it too much.

The last few episodes of the season ramp up the tension, with the deaths of several recurring characters, a massive alliance of races meeting the Shadows in a cataclysmic confrontation and a season finale that is pretty stunning, moving from an intense, revelation-packed character piece to the unleashing of the apocalypse.

Season 3 of Babylon 5 (****½) isn't quite as intense and powerful as the second, but the more action and incident-driven narrative works quite well, whilst 'The Trilogy' and the culminating arc of episodes at the end of the season stand right up there with the best SF TV has to offer. It is available in the UK and USA on DVD either by itself or as part of the Complete Babylon 5 set (UK, USA).