The Shadow Rising by Robert Jordan

The Shadow Rising is the fourth Wheel of Time novel and, through the highly scientific method of checking a few fan-forums, appears to be regarded as the best. At a whopping 1,000 pages and just shy of 400,000 words in length, it's also the longest. 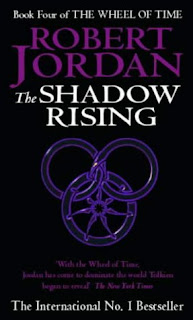 The Shadow Rising, in a controversial move, picks up after the events of the third book. You might think that's to be expected, but these days you're lucky if the latest volume of your favourite epic fantasy doesn't take place on another continent four years before the last book with a totally different cast of characters. Anyway, Rand al'Thor has taken the Sword That Is Not A Sword, Callandor, The Sword Which Cannot Be Touched, The Sword Which Has Too Many Fricking Names, Just Pick One And Stick With It. As a result he has been proclaimed the Dragon Reborn and the nations of Tear and Mayene have sworn loyalty to him. With the evil Forsaken seizing control of other kingdoms across the continent, it appears that Rand has little choice but to go to war against them. Instead, he wrong-foots both his enemies and allies by delivering humanitarian aid to the neighbouring, warring kingdom of Cairhien and travelling into the Aiel Waste, where he hopes to unify the feuding warrior-clans under his leadership. At the same time, his friend Perrin returns home to the Two Rivers, which is under attack by Shadowspawn, and Nynaeve, Elayne, Thom and Juilin head to the distant city of Tanchico in pursuit of the evil Black Ajah, Aes Sedai sworn to the service of the Dark One.

This breaking of the narrative into three storylines which proceed simultaneously worked very well for the third volume, The Dragon Reborn, and continues to work well here. Jordan's sometimes sluggish pacing isn't so much of a problem here as we flip between events in Tanchico, the Two Rivers and the Waste fairly rapidly, and there's an additional subplot set in Tar Valon which delivers some devastating plot developments on the Aes Sedai front in a very economical manner. The worldbuilding is advanced impressively as we get a decent look at the Age of Legends and the way the world was before and during the War of the Shadow, and character-wise we see some interesting maturing and advancement for the likes of Mat, Nynaeve, Perrin and Rand. Unfortunately, other characters come off badly. Moiraine is inert for a lot of the narrative, and Elayne continues to annoy whilst Aviendha is probably the most irritating character in the series at this point. Also, Jordan's somewhat juvenile views of male-female relations reaches their apex here, with supposedly comedic or ironic musings on the way men and women interact falling very flat indeed. The book also wears its influences strongly, although the mixing of Dune with the Scouring of the Shire is diluted by enough original characters and ideas so it doesn't irritate as much as the first book's nods to Tolkien. 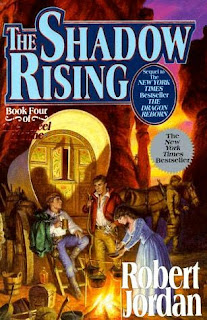 The pacing is crisp, the characters and world develop most satisfyingly, and Jordan very cleverly laces some narrative time-bombs into the mix which don't bear fruit for several books, but when they do are all the more satisfying.

The Shadow Rising (****½) is indeed the best book in The Wheel of Time sequence and impresses as it marks the transition of the books from the 'adventure' phase to the 'political' phase and does so most satisfyingly. The book is published by Orbit in the UK and Tor in the USA.
Posted by Adam Whitehead at 22:29

Email ThisBlogThis!Share to TwitterShare to FacebookShare to Pinterest
Labels: robert jordan, the shadow rising, the wheel of time

Yes, THE SHADOW RISING is the best book in THE WHEEL OF TIME, by far.

I have read Gene Wolfe, just not since the blog began. A review of THE BOOK OF THE NEW SUN is something I plan to get around to eventually.