Lord of Chaos by Robert Jordan

The sixth book of The Wheel of Time takes us deep into the second act of this massive story, with the transition to a more political-oriented narrative continuing apace. Lord of Chaos is one of the more divisive books in the series, with fans praising its deeper exploration of ideas and intrigue, whilst critics bemoan the slow pace of the book compared to earlier volumes. 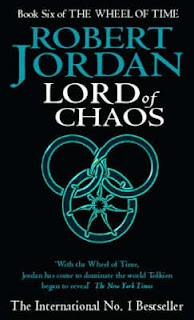 The kingdoms of Cairhien, Mayene and Tear are now sworn to the Dragon Reborn, and a successful raid on Caemlyn, capital of Andor, has seen that city fall to his forces as well. Several of the Forsaken, the most powerful servants of the Dark One, have been slain and Rand's successes look like they will continue unabated. In the south, he is assembling a vast army to send against the Forsaken Sammael in his stronghold of Illian, whilst the Aes Sedai remain divided on how to proceed with him. However, Rand's announcement of an amnesty for men who can channel has shocked the world, for all male channellers of the One Power are doomed to go mad and die, wreaking havoc as they go, and some of his enemies are prepared to move against him before that can be allowed to happen.

The theme of the sixth book in The Wheel of Time is consolidation. Rand's forces have absorbed vast amounts of territory, but before he can resume his campaign he must secure that which he holds already. With scheming against him in Andor and Cairhien underway and an outright rebellion going on in Tear, this proves a difficult task. Rand also has to find a way of dealing with both factions of the Aes Sedai, an undertaking fraught with peril. His companions also have their own problems to deal with: Perrin must prove his worthiness to his wife's parents, Mat has to deal with the issues of becoming a general, and Egwene, Elayne and Nynaeve have complex currents to negotiate amongst the rebel Aes Sedai. Even Pedron Niall, commander of the Children of the Light, has significant problems he has to overcome in both his own ranks and his dealings with the displaced Queen of Andor, whilst the surviving Forsaken scheme incessantly against one another.

The problem with this kind of stock-taking is that it is hard to work up a dramatic story about it. Instead, you end up with lots and lots of talk. Characters sitting around talking about the plot, about what has already happened and what they think might happen in the future. That's when they are not engaged in increasingly tedious and infantile discussions about male-female relations, which by this volume are starting to get a mite repetitive. The politicking and intrigue is fine as far as it goes (although fans of GRRM or Bakker may find it a bit on the shallow and simplistic side), but you do need a bit more to spice the book up. There's some fine, atmospheric interludes in the book, such as Rand taking a brief sojourn in the desolate, cursed city of Shadar Logoth, but overall the novel has serious pacing issues. Simply put, this is a 1,000-page book in which not a lot happens for the first three-quarters of it. 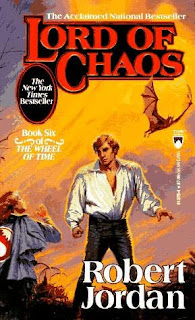 Towards the end, however, the pace starts to lift quite noticeably as Rand's attempts to play the two Aes Sedai factions off against one another backfire spectacularly and some of the most surprising events in the entire series take place, culminating in a massive battle at the spring of Dumai's Wells in which Jordan's sometimes-variable skills at depicting action, drama and the ability to tie together disparate storylines are put to their best effect. This late burst of action sequences and confrontations is extremely effective, and Dumai's Wells often tops readers' polls as the most satisfying moment of the entire series to date, with some fine moments right at the end of the book which hint at much greater things to come.

Lord of Chaos (****) is a sedentary novel where events unfold slowly, but do succeed in laying the groundwork for the spectacular and satisfying concluding section of the book. I suspect many readers will be put off by the slow pace, but I found the payoff to be more than worth it. The novel is available in the UK from Orbit and in the USA from Tor.
Posted by Adam Whitehead at 22:15

Email ThisBlogThis!Share to TwitterShare to FacebookShare to Pinterest
Labels: lord of chaos, robert jordan, the wheel of time