On its original publication in Japan in 1999, Battle Royale was a surprise hit. Its author, journalist Koushun Takami, had written it for a literary competition but it had been rejected due to its controversial content and violent storyline. Of course, these very things combined with its searing commentary on Japanese society and reviews drawing comparisons with William Golding's Lord of the Flies made it immensely attractive to a younger audience. 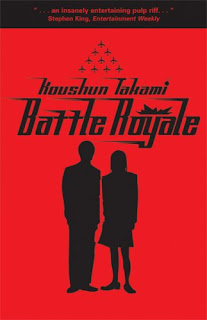 The setting of Battle Royale is a little confusing, but it is eventually revealed that the book takes place in an alternate-reality timeline where Japan remained a police state after WWII and still controls much of Asia. Japan's schoolchildren and students are becoming more and more unruly as American culture and notions of freedom seep into the country, most notably via illegal musical imports (Bruce Springsteen's lyrics from 'Born to Run' are an influence on the main protagonist). To keep them under control, the Japanese government has instituted the Battle Royale programme. Every year, fifty classes of schoolchildren are dumped on various islands, equipped with weapons and told to slaughter one another. The last survivor is allowed to go free. The idea is that this horrifying threat will enforce peace and tranquillity on Japan's schools, but of course this doesn't quite work, with instead the programme being seen as a game to be followed and the winners become celebrities.

The novel follows one such class of schoolchildren as they are shipped to an abandoned island, given weapons and have failsafe bombs attached to necklaces placed around their heads. Any attempt to swim off the island or remove the necklace will result in it exploding. If at least one student isn't killed every 24 hours, all the bombs will be detonated simultaneously. The situation appears hopeless, apart from something the organisers didn't plan for. One of the students has played the game before...

Battle Royale is a scintillating novel. The premise is pretty shocking, but works brilliantly. By taking a bunch of schoolkids and ramping all of their petty animosities and arguments to the max and then giving them high-powered weaponry, Takami creates a situation which is both horrifying and, insanely, is also convincing. The characters are all pretty standard archetypes, with the class bully, the stuck-up rich girl, the innocents, the nerds, the peacemakers and so on, with Takami exploring the hierarchy of classroom power and how it is affected, or more accurately how it isn't particularly affected, but the disturbing situation these teenagers are placed in. The novel's length (over 600 pages) allows him to paint all 42 of the kids in reasonable detail, adding backstories and motivations to each character, usually engendering the reader's sympathy for each one just before they get violently offed.

Battle Royale works as a searing condemnation of humanity and how easy it is to slip into barbarism (much like Lord of the Flies, though with less spears and more petrol bombs and samurai swords), the inability for any repressive regime to maintain control over the imagination of the young and also that overconfidence always leads to a downfall (the ending of the novel, although possibly predictable, is deeply satisfying).

Battle Royale (*****) is the first novel I've ever reviewed on this blog which I feel compelled to add an advisory warning to: this book features a bunch of 14 and 15-year-olds killing one another (and some adults as well) in various inventive and disturbing ways. The book is pretty full-on in its depiction of violence and cruelty. That said, the violence is not gratuitous. There is a story, character or thematic reason for everything that happens, and the cumulative effect of the narrative is exceptionally powerful. The book is published in the UK by Gollancz and in the USA by VIZ Media.

In 2000, the celebrated Japanese director Kinji Fukasaku released a movie adaption of the book, which drew on his own experiences in WWII when he and his classmates were forced to work in a munitions factory in an area under repeated US bombardment, and thanks to the lies of the government about Japan's success he saw his schoolfriends die around him. The result was an, if anything, even angrier version of the story. I'll be reviewing the film version in the near future.
Posted by Adam Whitehead at 01:08

I agree with everything in that review. Takami's like the Japanese Palahniuk.

brilliant...the review Adam. I've seen the movie (not read the book) and must say that the movie is superb as well.

No mentions of the sucky translation? I think my preference for the movie might actually have stemmed from that.