It's finally happened. The zombie apocalypse has come and devastated civilisation...but in the end, civilisation rallied and won. Using tactics pioneered in South Africa and bankrolled by Cuba, the largest nation to remain infection-free, the world's armies successfully defeated the undead menace, but only at a staggering cost in lives and resources. Ten years after victory was declared, a journalist travels the world, listening to the stories of the survivors, from those who were there when the outbreak began to those who listened in the corridors of power as key decisions were taken to the stories of everyday men and women thrust into circumstances beyond their control. From Hawaii to China, even to the isolated crew of the International Space Station, this is the story of that war. 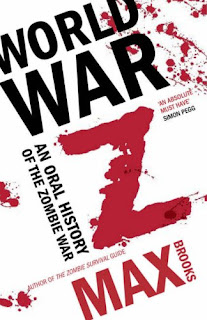 World War Z is that most beloved of Hollywood ideas, 'high concept'. One of those ideas that makes other writers go away smacking themselves in the head thinking, "Why didn't I think of that?" Zombies are very much 'in' these days, but after several years of zombie movies and computer games the appeal was waning, until Brooks' interesting take on the concept revitalised interest. Most zombie fiction is somewhat nihilistic, ending with the world overrun by the undead hordes or humanity reduced to tiny enclaves battling the mindless hordes, so the fact that World War Z features a victory is interesting enough. The stories of what sacrifices were necessary to achieve that victory makes up the book, which is essentially a 'mosaic' novel rather than a standard work of fiction. The book shifts between the different interviewees, some of whom appear only once but most of them reappear periodically throughout the book, as we find out how they survived the decade of the war and what happened to them along the way.

It's an excellent device and Brooks employs it skillfully. Some of the stories border on the silly - the blind Japanese gardener taking on the zombie hordes with a sword in a park full of traps stretches credulity - but elsewhere Brooks nails the feeling of total horror, with the computer nerd trying to flee his infested Japanese apartment block or the soldiers fighting to clear the catacombs under Paris. Elsewhere Brooks takes the capabilities of the zombie menace to their logical conclusion, with heavily-armoured divers fighting off zombie forces underwater, or the US army making full use of dogs (who are driven wild by the presence of zombies) in fighting the hordes and the fates of both the animals and their handlers during and after the war.

This is a widescreen story, with a truly global perspective, told economically and well. There are some good laughs (the new US zombie-dispatching firearm is nicknamed a 'Meg', as it resembles a Megatron toy from Transformers; during one battle a nun and REM lead singer Michael Stipe help fight off the zombie hordes), but Brooks takes his subject mostly seriously and sounds some cautionary notes along the way. To some extent the story isn't really about the zombies, but about people and what they are capable of when their backs are against the wall.

World War Z: An Oral History of the Zombie War (*****) is a gripping, page-turning, memorable read which throws some fresh impetus on an old idea, and makes it work brilliantly. The book is available in the UK from Duckworth and in the USA from Three Rivers Press. A movie version is in development, with a script being written by Babylon 5 creator J. Michael Straczynski.
Posted by Adam Whitehead at 20:19

Babylon5 is my favorite!!!