The Wire is, at first glance, Yet Another Cop Show, about a group of disparate and conflicted police officers working to bring down criminals who are often not much better than they are. Yawn. However, there are two things that mean that people should take this seriously. Firstly, it's made by HBO who, up to a couple of years ago anyway, seemed physically incapable of making something unless it was absolutely gripping and awesome. Secondly, it's the creation of former police writer and journalist David Simon, whose previous show was the brilliant Homicide: Life on the Street. 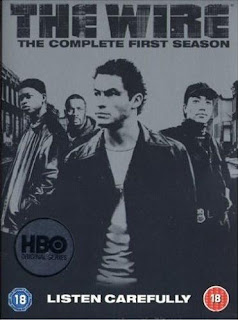 The Wire kicks off on the mean streets of Baltimore, Maryland, in 2002. A murder case against a young black man named D'Angelo Barksdale collapses when one of the witnesses is scared into retracting her testimony. The furious judge learns from homicide detective Jimmy McNulty that D'Angelo is a junior member of a far-reaching criminal gang run by his cousin, the extremely elusive Avon Barksdale. This gang controls all the drug supplies on the west side of the city, and are protected by a labyrinth of legit front organisations. Determined to get some payback, the judge uses his influence to have a special joint homicide-narcotics unit formed to bring down the Barksdale gang, with McNulty assigned and an up-and-coming officer named Lt. Daniels placed in charge.

The investigation into the Barksdale organisation by the unit forms the backbone of the first season of the show, but that's just one side of the story. We also get to see the investigation from the POV of the criminals themselves, most notably D'Angelo as he finds himself free but busted down to supplying the lowest of the estates, as well as the kids who work for him. A dangerous, unpredictable third faction is also in play in the form of the one-man army Omar Little, a criminal whose personal code means he can only steal from other criminals. The police try to form an alliance with Omar to bring down Barksdale, but their erstwhile ally has an unfortunate tendency to blow away the criminals they're trying to get locked up, which makes this a difficult task.

The appeal of The Wire is hard to explain to those who haven't seen it. It's fairly slow-moving (although never dull) in places and arguably takes two or three episodes to really kick in. It's also pretty unforgiving if you miss an episode. Flashbacks to prior episodes are non-existent, and plot points and character and emotional arcs often turn on a single conversation from several episodes earlier. You need to pay attention here. Luckily, that's made easy by the tight writing, the ingenious methods the criminals go to avoid being caught and the even more intelligent methods the police need to use to investigate them, and the acting. It'd be almost impossible to single out any of the actors for praise. British actor Dominic West has the closest thing to a central role as McNulty, and handles the character very well, but Lance Reddick (more recently seen as the enigmatic Abbadon in Lost) holds every scene he's in as the formidable Lt. Daniels. Clarke Peters develops his character of Lester Freamon from almost a background role to that of the most intelligent and confident officer on the team in a natural and impressive manner. John Doman's constantly-infuriated performance as McNulty's commanding officer and eternal nemesis Major Rawls has to be mentioned as well.

On the criminal side of things, British actor Idris Elba (formerly seen as Vaughn in the excellent Ultraviolet) impresses as Stringer Bell, Avon Barksdale's trusted number-two man, and Larry Gilliard Jr. provides the main criminal POV as 'D' Barksdale, as he tries to claw his way back up the organisation amidst growing concerns about how the family does business. For most people - including Barak Obama - the stand-out performances in the show belong to two of the more morally ambiguous characters, namely Michael K. Williams as the dangerously unpredictable Omar and Andre Royo as 'Bubs', a street informant struggling with his own drug addiction. Royo's performance was so convincing that whilst filming he was offered a heroin fix by a passer-by who thought he badly needed it, and later referred to this as his 'street Oscar'.

The cast is uniformally brilliant (the above barely scratches the surface of the quality performances and characters on display here), the writing is fantastic and the show is, surprisingly, very funny. Whether it's the stories of some mind-bogglingly stupid criminals, or the ridiculous difficulties the team faces at getting a desk into their basement office, or Bubs' methods of identifying suspects for the police observers, the show has a jet-black vein of comedy which gives several laughs per episode. This is necessary because the show can be quite bleak, showing as it does wasted young lives amidst the crumbling tenements of a poor city, and a lot of the characters die in rather unpleasant ways over the course of the investigation. The investigation also ends messily, and the fates of many of the characters is left wide open for the second season.

The Wire: Season 1 (*****) takes a couple of episodes to build up a head of steam and get you into its headspace, but once that's done it never lets go. The show is available on DVD in the UK and USA, and also as part of the complete series box set (UK, USA). Fantasy writer Joe Abercrombie waxes lyrical on the show here, whilst British TV critic Charlie Brooker has a video appraisal here.

The show peaks with Season 4, which is an unbelievable run of stories all by itself.

I love this show and will have every season DVD box set soon.

As you might gather from others, if you think Season 1 is good, just wait for the next seasons. The final season might be the worst of the 5, it was a bit short, but even that is better than most out there.

This show, like just about everything HBO produces, is simply awesome.

I've watched all 5 seasons and don't think there's a dud in the bunch. The only complaint I had about season 5 was that it was the last, but I'm glad they went out on a high note making me want more (unlike, for example the final Sopranos season).

One of the things I liked was that the show explores different aspects of the city, its criminals and cops (like the longshoremen in S2 and the press in S5)

Just finished watching the first season. This shit is good. D'you know any place where I could find non spoilery good episode discussion/analysis for S1?