So, Babylon 5 narrowly avoided cancellation by the skin of its teeth in 1997 and was rescued by cable network TNT, who had purchased the repeat rights to the entire series and also agreed to finance the spin-off, Crusade. Whilst this decision initially pleased fans, it did concern those who had noted that J. Michael Straczynski had ended a lot of storylines in Season 4 to give better closure to the show if it had been cancelled. What was there left to tell? 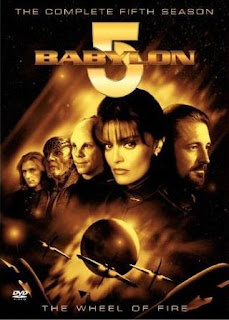 The year is now 2262. The Shadows and Vorlons have departed from the Galaxy, and the corrupt government of President Clarke on Earth has been pulled down. The other worlds have united under the banner of the Interstellar Alliance, but much work remains to be done to cement the worlds into a cohesive force. The new Alliance faces internal and external challenges as the now-masterless former servants of the Shadows hunger for vengeance.

Season 5 of Babylon 5 is its weakest and most problematic. The set-up for the season is good, but it has the feel of being the start of a whole new spin-off show, rather than the closing chapter of a story that's taken five years to tell. To suddenly go from stories of dramatic confrontation between former friends forced into being enemies, or stories of betrayal and consequences, to knockabout stand-alones about comedians visiting the station or a day in the life of two maintenance workers is rather jarring. The return of the stand-alone episodes after two years of very few stand-alones is unexpected and doesn't work very well, mainly as those stand-alones are merely repeating ground covered elsewhere, such as the Hyach/Hyach-do story which is a retread of the Centauri/Xon story covered much more briefly in Season 1. The season also suffers from the absence of several characters who left at the end of Season 4, most notably Claudia Christian as Commander Ivanova. Her replacement, Tracy Scoggins as Captain Lochley, gives it her all but comes off badly compared to her predecessor.

The dominant arc plot of the first half of Season 5 is also interminable. A colony of telepaths opposed to Psi Corps is established on the station, led by the supposedly charismatic Byron ('supposedly' because we are only ever told this about him, but never see it for ourselves). Their storyline pointlessly rams home points about the Psi Corps that were established much more effectively and succinctly in Season 1's Mind War or Season 2's A Race Through Dark Places. The Psi Corps are an amoral, cruel, bullying lot of racial supremacists. We get it. Move on. A rare high-point in this first batch of episodes is Day of the Dead, written by Sandman creator Neil Gaiman, which is emotionally raw and gives Tracy Scoggins her best showcase in the series. However, an ill-advised subplot featuring celebrity magicians Penn and Teller misfires.

Things pick up in the second half of the season, as the focus switches back to the Centauri. Centauri ships are secretly attacking trade vessels belonging to the other races, but Londo is being kept out of the loop. As the Alliance gathers evidence implicating the Centauri, Londo realises something is very badly wrong on Centauri Prime, the Narn realise they have an opportunity to repay the Centauri for what they did to their homeworld, and a severe lapse in Mr. Garibaldi's judgement results in thousands of civilian deaths. This is B5 as we know and love it, with characters making bad calls and others paying the price in blood, with dubious morality and pragmatism overcoming ideology along the way. It's a nicely-handled arc, culminating in the superb Fall of Centauri Prime, which saves the final season from being a total waste of time. Unfortunately, this episode is followed by a rather tediously long denouement in which characters spend a lot of time saying goodbye to one another as they are assigned to new posts and B5's importance dwindles as the Interstellar Alliance's HQ is transferred to Minbar.

The series finale, Sleeping in Light, is an elegant and well-written episode which gives the show a real sense of closure, and is a fitting conclusion to this epic, huge saga.

Season 5 of Babylon 5 (***) has many missteps that threaten to render the series unwatchable, but it recovers for a late-season burst of quality reminiscent of seasons 2 or 3 before reaching a satisfying conclusion. It is available on DVD in the UK and USA, and as part of the Complete Babylon 5 box set (UK, USA).

Thanks for bringing up this series again and filling in some of the interesting background. I should dig out these DVDs and so how they look on a new wide screen LCD.... Anyway, have you seen these straight to DVD movies Lost Tales? I was terribly disappointed. Is JMS working on anything new these days?

JMS is becoming a Hollywood player. He wrote the movie Changeling, directed by Clint Eastwood and starring Angelina Jolie, which is out in the next few weeks and is heavily tipped for Oscars (maybe even a nomination for him). He's currently writing the movie version of the book World War Z, which I reviewed a couple of weeks back, and is doing a lot more comics work. He's said now that he's pissed off with the little faith that WB have shown for B5, particularly with the low budget for Lost Tales, and probably won't do any more B5 work unless someone gives it the budget it deserves. I haven't seen Lost Tales yet myself.

Thanks for the info. I'll keep an eye open for some more JMS stuff.