The Adamantine Palace by Stephen Deas

The Adamantine Palace is the debut novel by British writer Stephen Deas, and the latest in a number of high-profile debuts from Gollancz, following on from Scott Lynch, Joe Abercrombie and Patrick Rothfuss. 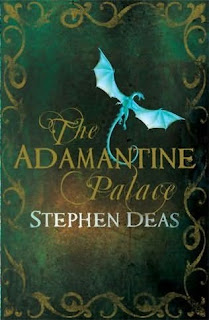 The nine realms are unified under the authority of the Adamantine Palace, from where the Speaker keeps the peace. The power of the realms are based on their mastery of dragons. More than seventeen hundred of these fearsome beasts exist, kept under control by discipline, training and the mysterious liquids created by the alchemists. Intrigue seethes in the nations, as the current Speaker, old and wasting away from illness, prepares to pass the mantle onto his successor, Queen Shezira of the North. However, Prince Jehal from one of the southern realms is playing his own, long-term game. When Shezira's daughter is promised to Jehal in marriage, a chain of events is set in motion that will plunge the realms into chaos, and amidst the politicking a dragon goes missing and an ancient secret is unveiled.

The Adamantine Palace reads like a gritty remix of Naomi Novik's Temeraire novels. The dragons here aren't fluffy or cuddly, but dangerous beasts whose very training usually costs human lives. They are hazardous animals to be respected rather than talking flying ponies, and when we get a look into a dragon's mind later in the book it is revealed as a rather alien and unfeeling place indeed. The story is interesting and many of the characters are well-defined, particularly Prince Jehal, one of the more interesting recent examples of the 'magnificent bastard' archetype.

You can almost sense the large 'but' coming, can't you? The Adamantine Palace is a fast, breathless read, but that's also it's biggest problem. The book is only 350 pages long (in ARC form, anyway) but contains a massive seventy chapters, few of which are more than four or five pages long. This is fine to start off with, but by the time the book is halfway done, ideas, characters and storylines are not so much flying past but feel like they've been blasted out from a minigun like the one Blaine had in Predator. Frequent changes in POV, location and the political situation can leave the reader feeling somewhat overwhelmed, and a number of characters (particular the sell-sword Kemir and Princess Jaslyn) don't quite feel as developed as they could have been due to this. Some major events towards the end of the book are as huge to this world as say Ned's execution is in A Song of Ice and Fire, but because they've been built up to so fast and then happen so quickly, they don't feel tremendously significant. At times, and this may sound unduly harsh, The Adamantine Palace feels like an incredibly detailed synopsis for a fantastic fantasy novel, rather than a book in itself. Ironically, as I normally like it when a writer delivers a short, concise epic fantasy novel, this book really does feel like it should have been twice as long to really give the events it covers much greater resonance and weight.

As it stands, The Adamantine Palace is a fast, furious and entertaining book that grabs hold of the reader and whisks them off like a rollercoaster. The dragons, as promised, indeed kick ass and the book's ending is enticing enough to make the year-long-wait for the second volume feel irritating. However, the feeling of a lack of weight to elements of the narrative also makes it feel like a somewhat slighter book than perhaps it deserves.

It is a lot of story packed into a relatively low word-count, and in other things I've written, I've allowed the background a lot more space to grow (so yes, by all means complain to my editor about the books being too short!)

What I really want to know from those (and you're not alone) who found the pace a little too much is this: does it grow after you've read it? Now that you've finished it, do you find yourself mentally coming back to it, filling in the blanks? That's really what I was aiming for.

Anyway, glad you (largely) liked it.