It is 1946. WWII is over, the Soviet Union has crushed Nazi Germany and now exerts control over a vast swathe of Eastern Europe. However, Stalin is uneasy. He knows that the decadent United States will collapse within a decade and without an enemy to galvanize it, the Soviet Union's pursuit of worldwide Communist revolution may falter. He summons a group of the USSR's leading science fiction writers to a remote dacha and has them create a new foe to energise the Russian people. They concoct a story of radiation-based aliens launching an assault on the Earth by initially destroying an American spacecraft and then launching a devastating radioactive assault on the Ukraine. After several months of work, Stalin has the project terminated and the writers are sent back to their lives, warned never to speak of the project again. 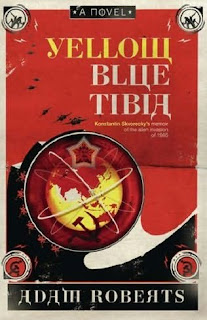 Forty years later, Konstantin Andreiovich Skvorecky believes himself to be the sole survivor of that meeting. Eking out his old age as a translator, he, like much of the rest of the world, is shocked when the American space shuttle Challenger explodes after take-off. However, he is soon contacted by another survivor of that fateful writing circle and told that the events they made up are now starting to come horribly, irrevocably true. And the next sign will be an immense radioactive explosion somewhere in the Ukraine...

Yellow Blue Tibia is certainly a different SF book. It isn't strictly an alternate history, but plays around with its ideas and tropes. It isn't a comedy either, but I guarantee it will make you laugh out loud on at least several occasions. The combination of several farcical scenes with very polite and proper Russian grammar gives rise to some entertaining linguistic combinations even Jack Vance would be proud of, whilst the testicular-obsessed KGB interrogation scene is quite possibly a work of genius.

As with Swiftly, Roberts' previous novel, the book has a pretty straightforward and accessible opening half followed by the plot moving into an area much more open to interpretation. Yellow Blue Tibia isn't quite as open-ended as Swiftly, but it does demand maximum attention as several scenes of complex and convoluted exposition take place which are both informative and extremely amusing. Even though the reader is pretty much told what exactly is going on, there is the slight feeling of the book ending with the reader being tipped out and left trying to remember exactly what the hell just happened. But in a good way. There's a definite delayed reaction before you go, "Aha, that was clever!"

Yellow Blue Tibia (****) - say it reasonably fast to a Russian person with a sense of humour - is a clever, confounding and strikingly amusing book that will make you ponder important burning historical questions, such as was Stalin actually an alien robot? And how do you solve the dichotomy of UFOs quite clearly not existing but simultaneously being vitally important to the lives of millions of people? The novel will be published in hardcover and tradeback by Gollancz on 22 January 2009. There is no US publisher at the moment, but Amazon.com will apparently be importing UK copies of the book on release.
Posted by Adam Whitehead at 22:37

I thought this was a fabulous book. It was absolutely hilarious at times and captured the dark absurdities of Russian life, particularly as the Soviet system began to crumble, brilliantly. It did require a fair bit of concentration to keep the strands of the plot together, but it was well worth it. Hugely recommended.