Wertzone Classics: Tales of the Dying Earth by Jack Vance

"These are tales of the 21st Aeon, when the Earth is old and the Sun is about to go out."

From one classic of the genre to another. Jack Vance's Dying Earth series is set in the distant, remote future when technology and magic have become entwined. His stories are tales of humour, tragedy and whimsy set at the end of human history, and are among the most distinctive tales in fantasy fiction. 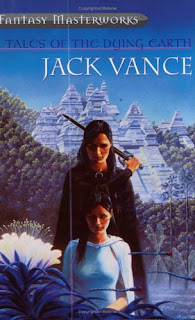 Tales of the Dying Earth collects all four of the principal Dying Earth books: The Dying Earth (1950), The Eyes of the Overworld (1964), Cugel's Saga (1983) and Rhialto the Marvellous (1984). Written over a period of thirty-four years, these books (themselves collections of short stories or episodes) are nevertheless fairly cohesive in style and readability. That said, The Dying Earth is somewhat more serious than the latter three books, and the central two novels are sometimes considered to form a duology, as they relate the misadventures of a scoundrel and thief named Cugel the Clever, whilst the other two books feature different characters and situations.

The Dying Earth itself is a collection of six short stories, but these are connected by an interesting writing device. Each story focuses on a central character who meets the central figure of the subsequent story in his own adventure, so the narrative is passed almost like a baton to the next character. So the book opens with Turjan, a wizard of some power, encountering the artificial construct T'sais. In the next story he is imprisoned by the wizard Mazirian, who is defeated in turn by T'sain, T'sais' brother. Then the narrative switches to T'sais' adventures. And so on. It's an interesting device for a short story collection and the stories are bound closely together because of it. However, The Dying Earth's success is in its atmospheric depiction of a far-future, dying world under a shrunken red sun. The stories themselves are interesting, but not as compelling as the later books.

The Eyes of the Overworld introduces Cugel the Clever, a rogue and scoundrel always on the look-out for a profit. He is manipulated by a dubious rival, Fianosther, into attempting to rob the manse of Iucounu the Laughing Magician, who discovers this attempt and is not impressed. He offers Cugel a choice between being entombed 45 miles below the Earth's surface, or journeying to remote lands to seek a mystical 'eye of the overworld'. Cugel is thus exiled to the far ends of the world to seek the artifact and has to return home, having numerous adventures along the way. It's Cugel's constant misfortune, at times reaching ridiculous and farcical levels, that makes this part of the story both hilarious and breathlessly enjoyable. By this volume Vance's skills as a writer have grown tremendously and his command of the English language is a joy to behold, with its flowery, polite terminology used to disguise feelings of hatred and jealousy like a particularly demented take on medieval court language. At length, Cugel apparently succeeds in his mission and gains the upper hand...until misfortune once again befalls him and he is left on a cliffhanger.

Nineteen years later (a break in a series that would be unthinkable today), Vance resumed the story in Cugel's Saga. Once again banished to the ends of the Earth, Cugel once again sets out for home, but this time travels by a different route. Essentially a second picaresque travelogue, the story is similar in structure to the preceding volume but is possibly even better, with more polished writing and Cugel's ambiguous appeal remaining intact. If anything, this book is even more hilarious than the second, although some may feel the relatively happy ending is not entirely in keeping with Cugel's typical fortunes.

The final book, Rhialto the Marvellous, is also sadly the weakest. It is much more overtly fantastical than the first three, incorporating voyages through space, but the focus on less interesting protagonists than Cugel means it feels like an afterthought. That's not to say the stories here are unenjoyable, merely that they are of a different nature than Cugel's and less distinctive because of it.

Jack Vance is one of SF&F's most distinctive authors, with a formidable grasp of language and a keen wit making him one of the genre's most interesting writers. The Dying Earth stories are rightly regarded as genre classics, inspiring works such as Gene Wolfe's astonishing Book of the New Sun and being cited as a major influence on numerous writers. The Dying Earth and Rhialto the Marvellous have aged somewhat, but the central Cugel stories are as fresh, comical and as fun to read now as they were when they were first published.

Tales of the Dying Earth (*****) is published in the UK by Gollancz as part of their Fantasy Masterworks range and by Orb Books in the USA. A new Dying Earth book, Songs of the Dying Earth, containing short stories by writers such as Tad Williams, Robert Silverberg and Neil Gaiman, edited by Gardner Dozois and George RR Martin, and authorised by Jack Vance, will be published early next year by Subterranean Press and HarperCollins Voyager.
Posted by Adam Whitehead at 16:49

Nice review for an excellent body of work. I'm a huge fan of Cugel the Clever!

Good review, I'm going to have to check these books out.

I think it would be awesome if you did a review of The Book of the New Sun. I just finished the second one, and I am in awe of Gene Wolfe's writing. I don't understand how he isn't more well-known.