Little Brother is the fourth published novel by Canadian author Cory Doctorow, the co-editor of the popular blog BoingBoing. As hinted by the name, the novel is inspired by Orwell's Nineteen Eighty-Four, but also serves as SF's second great take on cryptology and online security, the first naturally being Stephenson's classic Cryptonomicon. 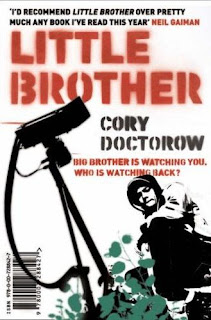 San Franciso in the near future. Al-Qaeda claims responsibility for a terrorist attack that destroys the Bay Bridge and kills over four thousand people. A group of high school students playing an alternate-reality web game are caught up in the resulting chaos and are interrogated by the Department of Homeland Security. Denied access to legal representation and threatened with torture and even execution should they reveal what has happened to them, they are released just before the seven-day limit, after which the police would being actively investigating any outstanding missing persons reports following the attack. One of the students, Marcus Yallow, becomes determined to expose the DHS' fascist tactics and sets up an online network - dubbed Xnet as it uses X-Boxes rather than easier-to-trace PCs to communicate - to undermine their security efforts and expose their attempts to subvert the law to pry into the lives of innocent citizens rather than actually doing anything that would prevent another terrorist attack. Pretty soon his online persona is public enemy number one for the DHS and they begin closing the net around him and his friends.

Little Brother is an angry book. Doctorow is clearly pissed off about the USA's reaction to the War on Terror and how the hard-won civil liberties of the country, and even its Constitution and Bill of Rights, are being treated as optional in the name of defending people from terrorist attack, even though the actual chances of being caught up in a terrorist incident are miniscule whilst the chances of having their freedoms infringed by repressive laws are overwhelming. In effect, in the book the DHS is spreading the very fear and terror that al-Qaeda wants to achieve. This is quite effective, and whilst critics of the book complain that the treatment of American citizens is unrealistic, the existence of Guantanmo Bay basically proves otherwise. It's also worth noting that the DHS in the book is being motivated by another terrorist attack on a scale greater than that of 9-11, which puts a slightly different spin on things.

Little Brother may be angry, but it's also hugely readable. Like Cryptonomicon before it, Doctorow goes to some trouble to lace explanations of cryptology and internet security into the text whilst keeping the story flowing, and pulls this off well. Characterisation is pretty good, and what happens to Marcus is so outrageous you find yourself cheering him on even if he does come over as being fairly unlikeable through large chunks of the narrative (particularly when he completely forgets to inform the parents of one of his friends still being held by the DHS that their son is still alive). The methods he and his friends develop to outwit the DHS are fairly smart and amusing as well. The pages fly past and the pace and tension ramp up admirably, but for such a cynical book, the ending does come a little out of the blue and feels more than slightly cheesily upbeat. Also, those non-Americans who don't quite get how the relationship in power between the individual states and the federal government in Washington works may find the ending a bit mystifying as well, but it tracks.

Little Brother (****) is an angry, polemical book which I suspect will provoke both admiration and outrage depending on what side of the civil liberties in the face of terrorism debate you fall on. It's also a smart and clever book with a deep sense of cynicism which is slightly undermined by the happy-ish ending, but the journey remains entertaining. The book is available now in the UK from Voyager and in the USA by Tor.
Posted by Adam Whitehead at 21:05