Deep Space Nine, the second spin-off from the original Star Trek series, ran for seven seasons from 1993 to 1999. At the time it was originally on the air it was considered the 'awkward child' of the Star Trek franchise, being overshadowed at the start of its run by the end of Star Trek: The Next Generation and then for the rest of its run by the start of Star Trek: Voyager. Time has been kind to the series, however, and it is now widely regarded as the best - or at least the most consistently excellent - of the Star Trek television series. 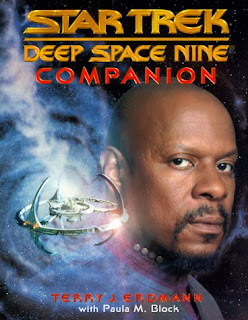 It's therefore appropriate that the best Star Trek series got the best companion book out of all of the series, and in fact probably the best non-fiction book ever written about Star Trek. To write it, Terry J. Erdmann took the unusual step of developing it alongside the series. He literally started writing it in 1993 when the show launched and completed it in 1999 after it concluded, publishing it in 2000. This - slightly mental - way of writing the book allowed him to interview the writers, actors and production staff at regular intervals when their memories of each episode were fresh, and in some cases be on-set for the filming of scenes. This wasn't a cash-in hack job to ride on the show's popularity, but an eight-year project that is impressive in showing its creators' commitment to doing as good a job as possible.

The format of the book is fairly standard. The book is divided into seven sections, one for each season of the show. There's an overview of the season as a whole and then a summary of each episode, as well as cast lists, transmission dates and all the usual gubbins you get in books like this. However, the meat of the book is the elaborate 'behind the scenes' section for each and every one of the 173 episodes that was made. These sections usually feature interviews with the episode writers about how the idea for the episode came about, comments from the actors who were heavily featured (regular, recurring and guest stars alike) in the episode in question, and discussions with the director and production crew who had to turn each script into a reality.

These behind-the-scenes sections are impressive. Every episode, no matter how minor or unsuccessful, has one, and they're usually between 2 and 4 A4 pages of reasonably small print in length. This is why the book is over 700 pages long, which is bordering on the 'insane' side of things for an episode guide. The reason for the length is that almost everyone involved in the making of the series offers insightful thoughts on the production process. The writers (including future Battlestar Galactica showrunner Ronald D. Moore) are honest and forthright in debating their writing choices, including what went wrong as well as what went right. Showrunner Ira Steven Behr's brutally honest appraisals of how dire episodes like Let He Who Is Without Sin and Proft and Lace made it to the screen are interesting and also extremely funny.

The actors also have their say, talking about how they developed their characters from episode to episode and why they made the acting choices that they did. Production crew are also interviewed, from the director of each episode down to the stuntmen, visual effects personnel and occasionally even the extras. The book makes it clear that vast amounts of work went into making each episode of the show. That the series turned out as well as it did under the chaos of a production schedule almost unthinkable today is clearly a tribute to the professionalism of everyone involved.

What is most interesting is the way the guide tackles the sometimes challenging relationship between DS9 and the rest of the Star Trek franchise. The writers are unapologetic about the problems they had on The Next Generation, where interpersonal conflict between the human characters was not allowed, and applaud the freedom that Deep Space Nine gave them to write more interesting psychological stories. They also reveal that Deep Space Nine had cast-iron rules about limiting the amount of technobabble in the series and a total ban on 'holodeck malfunction' episodes. However whilst the contributors are surprisingly honest, this is still an official tie-in book, so the severity of the disagreements between the DS9 staff and overall Star Trek franchise-runner Rick Berman are downplayed (more recent interviews indicate some of these disagreements were a lot more serious than this book indicates, with Berman eventually giving up and preferring to work on Voyager). The absence of any mention of the rivalry between the DS9 and Babylon 5 fanbases is also interesting given some of the things happening at the time, probably another casualty of the book trying to take a positive view of everything.

Still, whilst there's a few areas the book doesn't touch on, pretty much everything else about the series is explored in ridiculous detail. From the transition of motion-controlled model work to full CGI (the revelation that a considerably more elaborate version of the Battle of Wolf 359 from the pilot episode was shot but has never been shown is tantalising; maybe something for a future Blu-Ray release?) to the ongoing evolution of the prosthetics work, there's few side-areas of the production that are not touched upon.

The Star Trek: Deep Space Nine Companion (*****) is hands-down the best tie-in book of its nature I've ever read, and in this age of instant and free-to-access wikis and production videos and webcasts, maybe the best there ever will be. It's an impressive guide to how this series was conceived and filmed, packed with fascinating revelations and trivia. Even if you have no interest in DS9, it's still a fascinating read for anyone interested in the process of producing a weekly science fiction TV show. The book is - sadly - long out of print, but copies (for somewhat excessive prices) can still be found on Amazon UK and Amazon USA.
Posted by Adam Whitehead at 16:58

Every time I rewatch seasons of DS9 I tend to jump back into this book in between episodes. It's so jam-packed full of content! Love it to pieces.

The timing for this is quite eerie, because I just finished watching DS9 last night. In the past few hours, I've been scouring the internet for additional videos and looking up interviews and quotes with the producers, trying to glean a bit more... Quite inevitably, I found myself wondering if it wouldn't make sense to look out for some kind of companion guide.

And then, a few hours later, I read your review. So... seems like I ought to read this. Unfortunately, it seems like one of those books that isn't readily available (it's not in either of my local libraries...), but I will certainly be keeping an eye out for it.

I was pitching to Star Trek at this time and I can tell you for a fact that as far as Paramount was concerned, there was no rivalry between DS9 and B5. Now, I don't know if Berman ever saw the B5 pitch, but I know that Michael Piller never saw or read it and the only DS9 actor who ever watched the show, that I know of, was Siddig El Fadil. In the fanbase there was a big to do about a rivalry and even that was mostly from B5 fans. In other words, this so-called rivalry had no place in the DS9 Companion.