The most complete ASoIaF World Map yet

Westeros.org contributor (and TitanCon co-organiser) SerMountainGoat has created a new world map for A Song of Ice and Fire. The map was inspired by the superb map of Westeros created by poster Tear at the Cartographer's Guild a couple of years ago (a map so good the HBO crew used it for referencing whilst planning the TV series), but adds Essos, Sothoryos, Ibben and the Summer Islands to the mix (some of the placements of which I worked on for my own stop-gap map from last year). 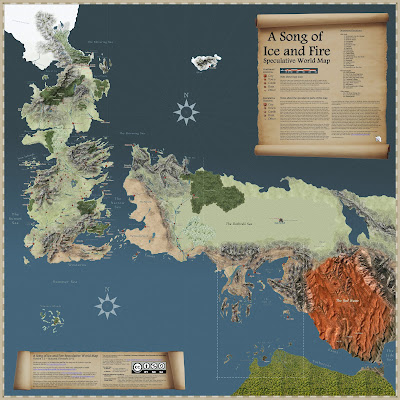 After completing the map, SMG contacted George R.R. Martin. Martin commented on the map's accuracy and also revealed some fresh information about the forthcoming Maps of Ice and Fire book, due on October this year.

"This is a very handsome map. And based on the information you have, it's quite good.

But of course there's lots of information you don't have, so it's not accurate. There are certain things -- the geography and location of the Summer Islands, the placement of Qarth and the Jade Gates, everything east of Slaver's Bay and the Dothraki Sea... that you would have no way of knowing.

(...) I've been working on maps for the Bantam map book for most of the last week. Including lots of maps of places we have never seen before, and a "known world" map that goes as far east as Asshai. (Not a true world map, of course. If my world contains analogues of the Americas, Australia, Antarctica, and the like, the people of the Seven Kingdoms are unaware of them, so it did not seem right for the readers to know more than the characters."

SMG's website (linked above) has multiple versions of the map, including label-less and pure 'geographic' maps for gamers, as well as using the map as the basis for an annotated, interactive timeline of the books. This is very much still a work in progress, but the concept so far seems impressive.

Kudos to SMG for the most definitive world map of the setting so far, and possibly the last major one before we get the official maps later this year.

ETA: Another Westeros poster, Maester Zoidberg, has posted his take on a world map here. It is also excellent.
Posted by Adam Whitehead at 14:00

Email ThisBlogThis!Share to TwitterShare to FacebookShare to Pinterest
Labels: a song of ice and fire, george r.r. martin, maps

Thanks for finding this, Adam!

Including lots of maps of places we have never seen before, and a "known world" map that goes as far east as Asshai.

So we'll finally resolve the issue of whether the Jade Sea is like the Black Sea or the Indian Ocean. :D