AD 117. The Roman Empire is attempting to complete the conquest of Britain, but is facing fierce resistance from the northern tribes, the Picts. During a Pictish raid on a Roman border garrison, Centurion Quintus Dias is taken prisoner. Determined to end the Pictish threat, Roman governor Agricola dispatches the Ninth Legion under the charismatic General Titus Flavius Virilus to resolve the situation. The Ninth Legion, aided by a treacherous Pictish scout and the escaped Dias, is ambushed and Dias and a small number of survivors must escape back to the Roman lines. 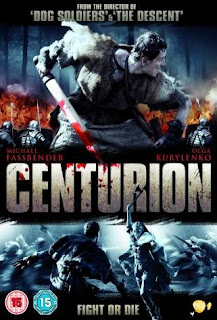 Centurion is the fourth movie from British director Neil Marshall, following on from the well-received Dog Soldiers and The Descent (and the not-so-well-received Doomsday), and can be seen as part of a mini-trend of low-budget Roman and medieval films (also including Black Death, Ironclad and The Eagle) made in the last few years.

The film has an impressive cast, with the current-hot-property Michael Fassbender starring as Quintus Dias. Fassbender carries the film with aplomb, and makes for a worthy leading man. Dias's restrained, thoughtful but effective style of leadership is contrasted against Dominic West's formidably heroic Virilus, which West handles excellently. After seeing West playing a succession of highly flawed characters, it's a refreshing change to see him playing a stalwart soldier who always does the best thing for his troops. The other actors are also pretty good, most notably Liam Cunningham as the unfortunately-named Ubriculius and David Morrissey as Bothos. Cunnginham, Morrissey and Fassbender have a great on-screen rapport and the scenes where Bothos, 'Brick' and Dias take on the world are great fun.

Noel Clarke (Kidulthood and a recurring character on Doctor Who) and Riz Ahmed (whose performance in Four Lions is fantastic) also bring some quality to the smaller roles of Macros and Tarak. Unfortunately, most of the remaining Roman characters lack characterisation to really stand out from the others. The movie also has a rather passive enemy in Gorlacon (Ulrich Thomsen) who fails to convince as a master warlord and tactician. More impressive is Olga Kurylenko as Etain, the mute warrior who leads the hunt for Dias and his men. Etain is mute, so Kurylenko has to get across her character without the aid of dialogue, which is a formidable challenge but one she rises to. The only other female character of note is Arianne (an interesting but ultimately too-brief appearance by Imogen Poots), a 'witch' the Romans encounter in the woods who turns out to be nothing of the sort.

The film starts out as a war movie, with its biggest setpiece being a chaotic battle in the woods clearly inspired by Gladiator's opening battle but with only a small amount of the budget available to film it. Marshall spends his resources wisely here to get maximum bang for his buck, resulting in a reasonably good battle sequence that gets across the incoherent chaos of this type of warfare very well. The rest of the move is a thriller in which one group of characters chases another across the Scottish Highlands. These sequences, filmed on location in Scotland, are stunning, showcasing some of the impressive vistas and landscapes in the north of Britain and adding authenticity to the action.

Structurally, the film struggles with the fact that it's basically a countdown to a final confrontation between the hunters and the hunted, and Marshall elects to get this out of the way sooner rather than later, contributing to the film's lean run-time of just 93 minutes. Impressively, he adds a subplot about how the Roman soldiers' years of struggle and sacrifice to bring the Picts to heel is sold short by the Emperor Hadrian's decision to withdraw from the lands they have managed to secure so he can build a new defensive wall. This then factors into the film's ending, giving us a different finale to what viewers may have been expecting given the film's genre and set-up.

On the negative side, the movie could have done with engaging with the morality of the situation a bit more decisively. The Romans are invaders in a country not their own and have conducted crimes of unspeakable brutality against the natives. As a result Etain and her people's military campaign against the Romans can be seen as fully justified. However, the film's structure and point-of-view seem to rely on us siding with the Romans. If Marshall was going for a more complex viewpoint - of sympathising with the Roman soldiers on the sharp end of the campaign whilst disapproving of the overall reasons for the invasion and occupation - this is not really given enough screentime to be effective. A sequence nodding in this direction in which Rachael Stirling plays the cunning and ruthless daughter of a Roman senator falls flat, as she only appears in one scene with no preamble. As a result, the movie's moral throughline feels confused and incoherent.

Centurion (***½) sports some excellent performances, some good pacing and some strong scenes of both characterisation and action. It certainly looks like much more money was spent on it than was the case (it certainly looks more epic and impressive than Ironclad, which had twice the budget of Centurion). Unfortunately, the film misses an opportunity to talk about the rights and wrongs of the situation and the potential for a more nuanced movie about war and occupation is lost. What we are left with is certainly an entertaining, well-made action movie but not much more than that. The film is available now in the UK (DVD, Blu-Ray) and USA (DVD, Blu-Ray).
Posted by Adam Whitehead at 17:18

I actually liked Doomsday, for what it was.

More Imogen Poots would have improved the movie, indeed. I liked the ending, and saw it as very similar in some ways to Doomsday's ending.