The Adventures of Tintin: The Secret of the Unicorn

Tintin, a young Belgian journalist, is drawn into a web of intrigue and deception when he buys a model of a ship called the Unicorn. At least two groups take an interest in the model and Tintin finds himself shot at and his flat burgled. Sensing a possible story, Tintin pursues the mystery of the Unicorn across multiple countries and continents to its surprising and unexpected conclusion. 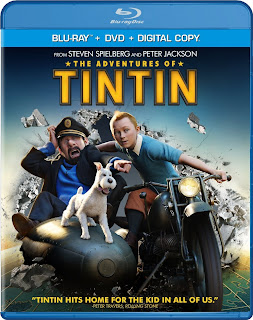 The Adventures of Tintin: The Secret of the Unicorn is a motion-captured animated movie directed by Steven Spielberg and produced by Peter Jackson. An enormous amount of creative firepower has been brought to bear on bringing Belgian cartoonist Hergé's characters to life. It was a bit of a gamble by Spielberg and Jackson, as the Tintin albums (graphic novels) are immensely successful worldwide but are relatively little-known in the United States. Making use of this fact, the movie was released in Europe several weeks prior to its American release, building up a good word-of-mouth that boosted the film's success in the States (and leading to a sequel being put into development).

I was a major Tintin fan as a child, collecting quite a few of the albums and watching the animated TV series. I was interested to see what Spielberg and Jackson could produce, but was also a little worried. Early trailers seemed to show an artistic style reminiscent of the 'uncanny valley'-stricken Polar Express (where the almost-human-looking characters are off-puttingly fake). Fortunately, the finished film is mostly a success, avoiding most of the pitfalls of CGI movies that try to stick too closely to realism. The animation is jaw-dropping, whether it's depicting an action-packed, one-shot motorcycle chase through a Middle-Eastern city, a battle between duelling shipyard cranes or a running gunfight on a ship at night. For the most part the characters are given animation and life, with a slightly stylised art style used that falls between realism and outright cartoons. The 'uncanny valley' issue remains in small doses, and is a particular problem with Tintin himself. Like his comic counterpart, the film's Tintin is a little on the bland side with few defining characteristics aside from his stoic heroism and determination. Luckily, his more colourful and interesting companion characters (most notably Captain Haddock, whom, as in the albums, steals most of the scenes he's in) more than make up for this lack.

As well as the successful animation, the movie is backed up by a strong, pacy script. Co-written by current Doctor Who showrunner Steven Moffat and British comedy directors Edgar Wright (Shaun of the Dead, Hot Fuzz, Scott Pilgrim) and Joe Cornish (Attack the Block), the script draws on storylines from three of the albums: The Crab with the Golden Claws, The Secret of the Unicorn and Red Rackham's Treasure (probably among the best-known and apparently the biggest-selling of the albums). The writers pack a huge amount of incident into the film's 110 minutes, but ably move between moments of characterisation, comedy and action without making the film feel too busy or short. Spielberg's direction is also impressive, particularly the aforementioned tracking shot depicting a motorcycle chase through a bustling city, which is much more successful than Spielberg's previous attempts to do long one-shots. A sequence in which Haddock recalls the adventures of his ancestor and mixes present-day shots of the desert and flashes back to a raging sea battle is also highly engaging.

Rounding off the film's success is the voice acting. Andy Serkis (best-known as Gollum from Jackson's Lord of the Rings movies) is great as Captain Haddock, imbuing him with comedy and pathos as needed. Simon Pegg and Nick Frost as Thompson and Thomson are also amusing, whilst Daniel Craig is superbly menacing as the film's primary villain, Ivan Sakharine. Jamie Bell does a good job with Tintin, but is not given a huge amount to work with.

Overall, The Adventures of Tintin: The Secret of the Unicorn (****½) is a highly successful adaptation of Hergé's characters and stories. The film is funny, dramatic, exciting and fast-paced, easily Spielberg's best work in a decade and hugely outstripping the terrible Indiana Jones and the Kingdom of the Crystal Skull as a rollicking adventure movie. Where problems emerge are a few (mercifully short) sequences where uncanny valley-itis sets in and the issues of Tintin not being a terribly engaging protagonist. But with its excellent voice acting, awesome visuals and well-paced script, the movie overcomes these problems with ease. The film is available now in the UK (DVD, Blu-Ray) and USA (DVD, Blu-Ray). I highly recommend the Blu-Ray version for its superior visual quality. This is one film which really deserves to be seen in as high quality as possible.
Posted by Adam Whitehead at 13:43

Email ThisBlogThis!Share to TwitterShare to FacebookShare to Pinterest
Labels: peter jackson, steven spielberg, the secret of the unicorn, tintin

Pretty much what I thought. It has its occasional problems with realism, but on the whole it succeeds at being a fun action movie.

Coincidentally, I watched it just yesterday on Blu-ray 3D. And at many points in the movie I thought that this is the Indiana Jones movie that Spielberg and Lucas should have made!
A great movie and a lot of fun.