Ralph McQuarrie, the concept artist who designed much of the look of the original Star Wars movies, has passed away at the age of 82. 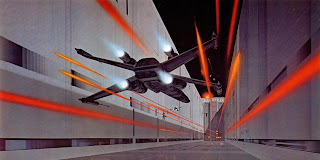 McQuarrie played a key role on the original Star Wars film, designing R2-D2, C3-PO and Darth Vader. He also created the final look of Chewbacca (drawing inspiration from a John Shoenherr painting for, of all things, a George R.R. Martin short story). He had a cameo appearance in The Empire Strikes Back. Many years later, he was asked to work on the prequel trilogy but declined.

McQuarrie also worked on Raiders of the Lost Ark, Stark Trek IV: The Voyage Home, *batteries not included, E.T., Jurassic Park, Close Encounters of the Third Kind and Cocoon, winning an Oscar for the latter. He also played a key role as a concept artist on the original 1978 TV series of Battlestar Galactica and did some work for the aborted Star Trek: Phase II TV project before it was abandoned.

George Lucas had this to say about his colleague:

"I am deeply saddened by the passing of such a visionary artist and such a humble man. Ralph McQuarrie was the first person I hired to help me envision Star Wars. His genial contribution, in the form of unequaled production paintings, propelled and inspired all of the cast and crew of the original Star Wars trilogy. When words could not convey my ideas, I could always point to one of Ralph's fabulous illustrations and say, 'Do it like this.'

"Beyond the movies, his artwork has inspired at least two generations of younger artists—all of whom learned through Ralph that movies are designed. Like me, they were thrilled by his keen eye and creative imagination, which always brought concepts to their most ideal plateau. In many ways, he was a generous father to a conceptual art revolution that was born of his artwork, and which seized the imaginations of thousands and propelled them into the film industry. In that way, we will all be benefiting from his oeuvre for generations to come. Beyond that, I will always remember him as a kind and patient, and wonderfully talented, friend and collaborator."

What a loss! I'm saddened to hear of Mr. McQuarrie's passing, and will keep his family in my prayers.