Kings of Morning by Paul Kearney

Years ago, ten thousand Macht mercenaries marched into the heart of the Asurian Empire and were betrayed. Only a handful of survivors, led by the famous warrior Rictus, escaped to see home. In the years since then, Rictus has lived through times of peace and war, standing alongside the legendary Corvus as he forged the fractious Macht cities into a single nation. The Macht have now re-invaded the Empire, this time deploying new weapons and strategies that baffle their enemies. But their greatest ally is the division and turmoil that seethes in the heart of the Empire, as the imperial household is divided at the very moment it needs to unify against the invaders. 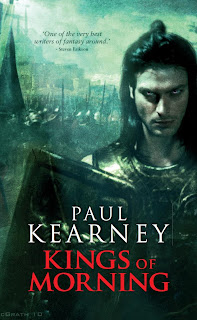 Kings of Morning is the third and concluding book in Paul Kearney's Macht sequence, which began with 2008's excellent The Ten Thousand and continued with 2010's even better Corvus. As with those books, Kings of Morning mixes fantasy with historical fiction and even a hint of SF: Kuf, the planet on which the books take place, is apparently an alien world and the Macht seem to be the descendants of human settlers/invaders, with the natives a notably different humanoid race. The influence of Alexander the Great on Corvus's story is clear, meaning the general trajectory of the plot can be a little predictable. However, Kearney mixes things up enough to ensure the story never gets stale.

Structurally, the novel is a little different to its two predecessors, which focused almost completely on Rictus's point of view. The opening quarter or so of the novel shows a political crisis within the heart of the Empire, as the brutish heir to the imperial throne, Kouros, and his younger brother engage in a bitter feud, with their father apparently unwilling to intervene. A hapless slave boy is unwittingly caught in the middle of this dispute, to his ruin (a strong stomach is required for the scenes where he is tortured by Kouros). This is an interesting way of starting the book and demonstrates Kearney's impressive power of concise storytelling without sacrificing depth. In this story the Macht are a vague and distant threat, easily dismissed, until it's almost too late.

We then switch back to Corvus, Rictus and the Macht army on the march and are soon back into a world of strategy meetings, comradeship and desperate battles against superior numbers. Yet Kearney, for all his reputation as one of the finest writers of battles working today (in either fantasy or historical fiction), keeps the martial action at a distance for most of the book, instead focusing on Rictus's character development as he sees the culmination of Corvus's plans and starts thinking about his own future. The conflict in Rictus between the lifelong soldier who tires of peace but hates the waste of war is developed well throughout the book and contrasted against the world-weariness of the Asurian Great King, Ashurnan.

Kearney's skills of characterisation are impressive, particularly the attention he gives to Kouros. Though an unthinking, thin-skinned brute, Kouros is given a backstory and motivation that explain why he is the way he is without ever risking him becoming sympathetic, and developing him as a villain (if he's even competent enough to be called that) much more than beyond the initial impression the reader gets of him. Kearney also undercuts the storyline of the two royal twins and their mutilated servant trying to flee into the wilds, with it moving in some very unexpected directions (even if the ultimate destination is unsurprising).

Kearney restrains the military activity to a few brief descriptions of sieges and negotiated truces before giving us one large battle. Inspired by several of Alexander's engagements, the Battle of Gaugamesh is an impressive display of depicting a complex engagement spread over a large battlefield in a straightforward manner. Kearney's skills at writing warfare remain undimmed, but it's his depiction of the aftermath, of the mix of disgust at the waste of life of war and admiration of the heroism of those who endure such hellish circumstances, which impresses the most.

The novel climaxes in a surprising fashion. Whether the parallels between Corvus and Alexander will continue or not is something that is not answered, as this trilogy is the story of Rictus, and that story ends impressively with Kings of Morning. We bow out of the story at this point with the full impression that life will go on regardless.

Criticisms are hard to find. The novel is very concise and at times the reader will want more information, more character scenes, more battle sequences, but these are not necessary for the story Kearney is telling. In epic fantasy it is rare to find an author who leaves the reader wanting more rather than feeling over-stuffed on thousands of pages of needless filler, and the former is definitely preferable. Some may feel the novel lacks a full resolution to Corvus's story, which is fair, but then this trilogy is not about Corvus and it certainly finishes Rictus's story in fine form. Finally, some may feel we don't get any revelations of note about the (possibly techno-organic) black armour of the Macht that makes them so difficult to kill, but again Kearney gives us some clues to be going on with and there are few possible explanations for it that would not veer towards either the obvious or the cheesy.

Overall then, Kings of Morning (*****) is a superb military fantasy novel and a fine conclusion to one of the best epic fantasy/historical fiction crossovers of recent years. The novel is available now in the UK and USA.
Posted by Adam Whitehead at 13:41

I was looking forward to the release of this book and your views but you have clearly spoiled the ending in the third last paragraph, your worst review ever.

Well hell now I'm excited. Does the first quarter of the book remind you of the approach Erikson took in House of Chains? It sounds similar, and I really enjoyed it in that book.

I don't think I did spoil the ending. 'Ending definitively' just means that the story ends with a door being closed on Rictus's tale, not that he's dead or alive or anything else. I was actually extremely careful not to spoil too much (and in a book that's as closely based on real history as this one, that's difficult).

As for the HoC parallel, kind of, in as much as that it's a different location and cast of characters we follow for 100 pages before rejoining more familiary characters. It's not as clever as HoC though (where Karsa actually ended up being a character we'd already met, and us not being entirely aware of it until near the end of his tale due to the name change).

I was a bit less satisfied with this one than with the first two books. It seemed that the whole intrigues at court thing went nowhere. Felt a bit rushed IMO.