HBO have announced that a companion book for the Game of Thrones TV series will be released in the autumn. 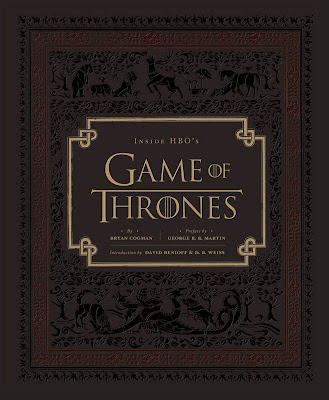 Inside HBO's Game of Thrones is a volume that mixes fictional background details with behind-the-scenes information, maps, family trees and interviews with castmembers. The book is 192 pages long and will feature over 300 colour photographs and illustrations, along with eight gatefold images. The book is written by Bryan Cogman, the show's 'keeper of the mythos' and writer of two episodes of the TV series. George R.R. Martin supplies a preface and showrunners David Benioff and D.B. Weiss an introduction. The book will be published on 19 September this year by Chronicle Books in the USA. It will be available in the UK via the British HBO merchandise site.

The book should not be confused with The World of Ice and Fire, an in-universe companion volume to the book series, which will likely be published in 2013.
Posted by Adam Whitehead at 12:28

Wow, that looks lovely, too!

Again I ask, who is crazy enough to buy this kind of crud?

Oh well, so long as there's money to be made...

Who am I to talk? I once bought the Meisha Merlin/Sub Press special editions before woke up and sold them. Of course now I'm doing the exact same thing with the Malazan Sub Press books - but at least they're actual novels and not just fluff pieces.

In this case it's a pretty straightforward bit of merchandising. These kind of companion books are always popular and sometimes collectible (because they are generally only printed during the time the TV series/movie/whatever comes out and are then dropped). They also provide useful information for the more casual fan who can't be bothered to visit several different websites and wade through lots of old material and interviews. That makes it a perfect Christmas gift for someone who likes the TV series.

Nice. Nicer would be if GRRM would produce a good book again, something we are waiting for for over 12 years now.