Chuck Bartowski continues his double-life, working at an electrical goods store in Burbank whilst also helping the CIA and NSA deal with threats to American national security. Chuck has the Intersect - the USA's combined database on all known terrorist and criminal threats - downloaded into his brain and is now an invaluable resource to the American government. However, Chuck is desperate to return to his old life and sets out on a mission to locate the creator of the Intersect and get him to remove it from his head... 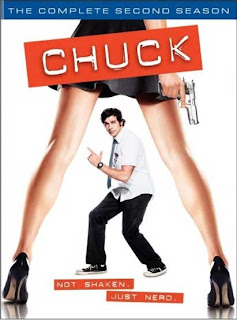 The second season of Chuck picks up after the events of the first season (truncated by the 2007-08 Writer's Guild of America strike) and, for a while, it's business as usual. The Chuck formula - Chuck solves a spy problem whilst dealing with a more mundane crisis at home or at the store - is intact and remains entertaining, but also risks becoming stale after a few episodes. Luckily, the writers have taken steps to minimise that problem by bringing in a sequential series of multi-episode storylines. In short order, Chuck has to deal with the reappearance of an old girlfriend, try to track down his missing father so he can give his sister away at her wedding, find the original scientists who created the Intersect, deal with a CIA investigation into Sarah's ability to be his handler (given their growing closeness) and deal with a head-on confrontation with FULCRUM, a shadowy and criminal intelligence organisation.

This structure allows the series to sustain 22 episodes without becoming too tedious or repetitive, helped by enjoyable writing and great performances from the regulars and guest stars (Scott Bakula! Tricia Helfer! Chevy Chase!) alike. The writers aren't afraid to give real character development and growth to their recurring actors, particularly Zachary Levi and Yvonne Strahovski as Chuck and Sarah. Their will-they, won't-they relationship may be a long-running series cliche, but is given a few twists here (particularly the fact that Sarah is well aware of Chuck's feeling from the start) that makes it a bit more interesting. Particularly well-done is that it feeds Chuck's character growth, turning him from a listless nerd into a much more capable spy by the end of the season. Adam Baldwin also develops a bit more as action man John Casey over the course of the season, though surprisingly he doesn't have many episodes that focus on his character. Instead he is mainly used for macho comic relief, aside from some nice moments in the final episodes where he grudgingly admits to, if not liking, than at least finding Chuck mildly tolerable and useful.

As usual, the dramatic storylines are counterbalanced by a strong humour quotient. This usually manifests in storylines in the Buy More. Over the course of the season there are multiple changes in management, culminating in the power-crazed Emmett rising to dominance late in the season. We also encounter Lester and Jeff's synth-rock cover band (whose covers are...interesting, to say the least) and feel Morgan's pain as his mother embarks on a noisily passionate relationship with Big Mike. As with the first season, though it's not as prevalent this time around, there is the feeling that you could set a whole series in the Buy More with these characters and it would be just as much fun without the spy stuff.

Overall, the second season of Chuck (****½) is relentlessly entertaining. There are a couple of episodes that don't work quite as well as the others, but otherwise this is a terrific season of television which rarely flags or lets up the pace. The only problem is that by its end if feels like the series is pretty much over, and the addition of a few moments at the end of the finale establishing the direction of the third season feels a little incongruous: the series was very nearly cancelled after Season 2 and renewed at the last minute, explaining why the end of the season wraps everything up and then rather abruptly opens up again. The series is available now in the UK (DVD) and USA (DVD, Blu-Ray).
Posted by Adam Whitehead at 16:13