The cover art and blurb for Steven Erikson's The Forge of Darkness has been released: 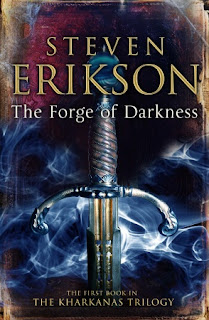 Enter the New York Times bestselling Malazan universe... at a time that sets the stage for all the tales already told.

Steven Erikson entered the pantheon of great fantasy writers with his debut Gardens of the Moon. Now Erikson returns with a trilogy that takes place before the events of the Malazan Book of the Fallen. The Forge of Darkness takes readers to Kurald Galain, the warren of Darkness, and tells an epic tale of a realm whose fate plays a crucial role in the fall of the Malazan Empire.

It’s a conflicted time in Kurald Galain, the warren of Darkness, where Mother Dark reigns. But this ancient land was once home to many a power… and even death is not quite eternal. The commoners’ great hero, Vatha Urusander, longs for ascendency and Mother Dark’s hand in marriage, but she has taken another Consort, Lord Draconus, from the faraway Dracon Hold. The idea of this union sends fissures throughout the realm, and as the rumors of civil war burn through the masses, an ancient power emerges from the long dead seas. Caught in the middle of it all are the Sons of Darkness, Anomander, Adarist, and Silchas Ruin of the Purake Hold.

Steven Erikson brings to life this ancient and important tale set in the world he introduced in the Malazan Book of the Fallen in a way that should appeal to fans of George R. R. Martin.

The novel, the first in The Kharkanas Trilogy, will be released in August in the UK and in September in the USA.
Posted by Adam Whitehead at 14:58

Purake Hold? Explains his full name. Is this a "hold" as in the precursors to warrens?

quote: "in a way that should appeal to fans of George R. R. Martin"

at first i laughed at the blatant name-dropping - taking advantage of GRRM's most recent successes... but then I thought how many fantasy novels have something like "appeal to fans of Tolkien" on the the cover? quite a few...

So besides it just being a marketing ploy, I guess it also means that George is now the Tolkien of the fantasy genre - which is pretty cool I guess... at least well-deserved I think.

Man, this guy is a beast. Amazon says the page count is 928. He can sure churn out the mammoth books quickly.

Erikson is the best fantasy writer out there easily. This is going to be great.

Will be interesting to see how Erikson writes this in comparison to MBOTF. He said he would do it a little different than the previous books.

Hopefully the three brothers are the main focus of this.

After the disappointment that was The Crippled God, my interest for this is very low. Erikson has far too many obscene flaws in his writing - an inability to write realistic dialogue or provide believable motivations for his characters being among the most egregious. There's also a palpable sense of arrogance in how he bloody-mindedly tries to subvert genre tropes and traditions, to the extent they harm the logical flow of his work. I mean, seriously, in what world does an army follow an uncharismatic leader to their certain deaths across a vast desert without any kind of explanation?

Hand-waving and mumbling about convergences and ham-fisted attempts at pathos and epic grandeur are a poor way of hiding the fact Erikson’s plotting is very poor. Rather damning when you consider his characterisation is even worse. Unless this new trilogy marks a wildly different direction, I have to say the Martin reference is about as inaccurate a comparison as one could make.

And despite all these alleged flaws you still read all 10 mammoth books (or at least books 4 and 10).

Masochist or just too much time on your hands?

This book cover is magnificent. This sword is intriguing as it does not match Dragnipur and yet the story includes Draconus and Rake. I can hardly wait for this new Erikson offering. Erikson is my number one favorite fantasy author! I can re read his Malazan series forever. It seems to never fail that a book review or cover story of Erikson draws the inevitable comparison to GRRM and always the few who HATE his books. GRRM is easily my second favorite fantasy author but these two authors are so very different in style and depth that I would never compare them and I always wonder why some do.

Yeah, gotta laugh about someone who read 10 books of that length and apparently couldn't stand them.

Erikson & Martin are easily the best fantasy writers around....
Both have their own style & both are excellent; however the biggest similarity between them would be the sheer epic nature of their respective series.
Erikson kept me happily busy during those 5 yr waits
in between Martin's books! Now by the time this trilogy is finished the next ASOI&F book should be done!

In what world would one follow an uncharismatic leader? In our world... George Bush ..
Gulf War.....