EXPANSE Book III given a title

Via their James S.A. Corey Facebook page, Ty Franck and Daniel Abraham have confirmed that the third book in The Expanse space opera series will be called Abbadon's Gate, following up on last year's Leviathan Wakes and Caliban's War (due in a couple of months). 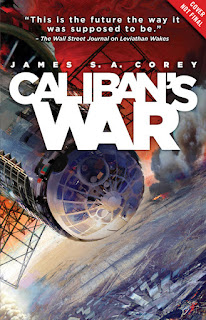 Also on the same Facebook page, the authors reveal that there will be a give-away of ARCs for Caliban's War closer to the release date. In the meantime, Orbit also have a sample of the novel available.


"The consensus (probably accurately) was that Dandelion Sky was a little too pastoral and Ray Bradbury for the book as it is."

It's worth noting an unfortunate similarity between the new title and Warhammer 40,000. The principal villain of WH40K, Abaddon the Despoiler, captured the Cadian Gate during a recent in-setting military campaign, leading to the two words cropping up a lot in those works. I doubt many people would confuse the two, but it's something the publishers might want to bear in mind.
Posted by Adam Whitehead at 10:19

They hinted at the possibility of a giveaway, and not necessarily of ARCs ;)

Is this a new title for 'Dandelion Sky' then? In the interview at the end of Leviathan Wakes they mentioned that as the name of the third book.