When Brother Brutha of the Omnian Church starts talking to a tortoise, he merely assumes that he has gone mad. However, when the tortoise turns out to be the great god Om who is having a Bad Day, Brutha finds that his faith is about to be put to the test... 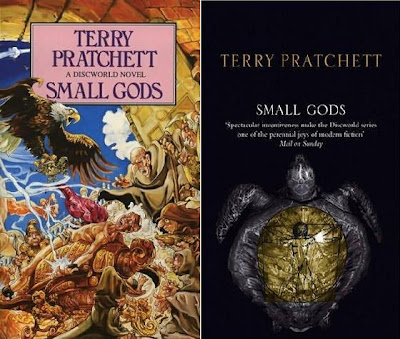 "This is religion, boy. Not comparison bloody shopping! You shall not subject your god to market forces!"
Up to (and including) Witches Abroad, Terry Pratchett was an author who wrote books that broadly fell in two categories: books that spoofed or were a satire of modern society in some way, often through broad comedy, and other books that were a bit more serious and had a point to them, though still amusing. The two sides had come very close to coexisting in Pyramids, but arguably just managed to avoid fusing into one impressive whole.

Small Gods is where Pratchett got it right. The entire book, from its first page to its last, is a lengthy, sustained and inordinately clever examination of religion, fundamentalism and blind faith and their conflict with reason, argument and science. And you barely notice, because the story itself is extremely taut, well-told and brilliantly characterised with Pratchett's occasional bursts of silliness kept to a minimum in favour of flashes of wry and at times angry humour. Small Gods is a book that Richard Dawkins would kill to have written, and done so in such a manner that even the most God-bothering evangelical would have still been riveted to it. 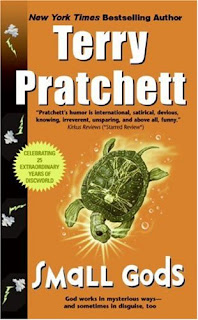 "You have perhaps heard the phrase that Hell is other people?"
"Yes, of course."
"In time you will learn that is wrong."
Small Gods has the veneer of being just a traditional Pratchett book: there's some jokes about men in togas arguing pointlessly about philosophy (in a world where it is difficult to have a conversation about, "Are the gods real?" when a lightning bolt will come flying through the window five seconds later with a label attached saying, "YES,"), Death has a couple of cameo appearances and there is a running joke about tortoises being nice to eat. But you can tell the subject matter really got Pratchett riled up. His hatred of blind faith and the idea that killing people is okay because some book says so - and, let's face it, that book was written by a old guy who might have been bitten by a donkey that morning and was a really foul mood when he started on the bit about doing unto others with fire and brimstone and was probably not, when you get down to it, an actual deity - really comes through in this novel, but in measured tones.

Character-wise, Small Gods may be Pratchett's strongest book. Most of the cast does not reoccur in the series (Death and a very brief trans-temporal appearance by a certain simian book-collector aside), but Pratchett still has time to paint them in impressive detail. Vorbis may be one of the scariest 'villains' (if that's even a right description) in the whole series. Brutha is certainly one of its most interesting protagonists. Om's pragmatic, tortoise-meets-deity outlook on life is amusing. Even minor characters like Didactylos and would-be rebel leader Simony are well-rounded and given good rationales for what they do.

"Around the god there forms a shell of prayers and ceremonies and buildings and priests and authority, until at last the god dies. And this may not be noticed."

Almost as importantly, the ending does not suck. Pratchett has a patchy record with endings, with his books sometimes ending okay and others being a bit of a let-down after a strong start and middle section. Small Gods, however, has a fantastic ending, starting with possibly the biggest belly-laugh out of all thirty-odd books in the series (hint: it involves something being airborne which shouldn't be) and proceeding from there.

Intelligent but never preachy, philosophical but never boring, Small Gods (*****) is Terry Pratchett's masterpiece (okay, his strongest masterpiece). It is the strongest Discworld novel and almost certainly the best thing he has ever written. The book is available now in the UK and US.
Posted by Adam Whitehead at 21:54

This is certainly my favourite Discworld book aswell. I would really like him to revisit these characters, but then it is really well finsihed, so maybe he shouldn't. Keep up with this Discworld project, it is encouraging me to continue the series again. Are there any other Discworld books that come close to this?

Most of the guards books are better.

Think I have read all the Guards books apart from the last one. I agree that they are some of the best. However, the earlier ones where a bit silly, and the latter ones Vimes backstory was getting too clogged up. Although having Vimes and the Patrician in the same book, should mean the book certainly wont suck.

This and Hogfather are my favourite Discworld books (and Hogfather mostly because of the scene with Hex and the Wizards when they're talking about how they spent their Hogswatch's as kids - had me in hysterics).

Recently finished Unseen Academicals and loved that one as well.

I rate the guards books very highly, and certainly Guards! Guards! is a funnier book. However, I don't think any of them really work on the same level Small Gods does. Night Watch comes closest, but is hamstrung by the fact you really need to have read all five prior Watch books to get a good context for what Vimes has been through.