The Worlds of D&D: Overview

Since its inception in the early 1970s, the Dungeons and Dragons role-playing game has attracted millions of fans, both of the game itself and the numerous worlds that were created as settings for its adventures. After the demise of the original publishers, TSR, in 1997 and the sale of the game to Wizards of the Coast, most of those worlds were unceremoniously dumped, including the more quirky and original ones, in favour of the somewhat more traditional and popular 'basic' settings which became the bread and butter of the game's 3rd Edition (2000-2007). The new 4th Edition, launched last year, has proven highly controversial with fans but Wizards have won some support for their decision to resurrect some of the old, classic campaign settings for the new game.


At this current time, Wizards of the Coast are continuing to support both Forgotten Realms and Eberron through new products for the 4th Edition of D&D. It has been officially announced that Dark Sun will be resurrected for 2010, with a strong chance that Dragonlance will follow in 2011 and Greyhawk for 2012. Planescape and Ravenloft have been absorbed into the base cosmology of the D&D multiverse and will apparently appear as adventures and as asides in the rulebooks, but probably not as fully-blown campaign settings in the future. 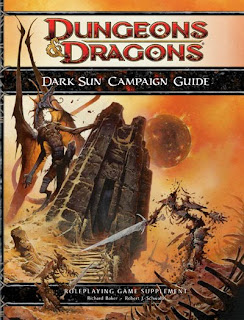 Hopes that Mystara, Spelljammer and Birthright will reappear seem somewhat premature so far, but if the new version of Dark Sun is a big success it is possible we will see other settings revisited. The new 4E business model is also more favourable to these old, less commercially popular settings. In the old days, TSR would release a boxed set featuring the setting and then follow it up with lots of expansions, adventures and novels. The new model instead only has three products released for each setting: a general campaign book, a player's guide and a single adventure. Other material is then released online via the D&D Insider website, based on the sales of the physical books.

Future instalments of this series will visit some of these individual worlds and finds out what made them tick, what made them work (or in some cases fail rather badly) and whether we will see them again in the new edition of the game.
Posted by Adam Whitehead at 15:56

Great timeline! Thanks for posting. I had no idea there had been so many worlds created.

Adam, do you currently play in a campaign? If so, which world/edition?

Not at this precise moment. Our group tried 4th Edition and didn't respond well to it, but then the group had a bit of a schism over those who wanted to play a level-based system like PATHFINDER or a skill-based system like White Wolf's STORYTELLER (which I am not a fan of at all, although I like other skill-based systems like DEADLANDS), so we compromised by playing ROCK BAND for the last few weeks instead :-)

Me and my friends tried the 4th world/edition, but couldn't understand the character creation paper. We didn't know how much character features, feats and other abilities we got so we used my 3rd edition.

Do you new know any where to order or buy Dungeons and Dragons equipment?

Do you know any where to order or buy Dungeons and Dragons equipment. (srry spelling errors)

I was never a big roleplayer though I did have a lot of the core 3E material and books just because I loved reading them. I was only ever really into AD&D in the TSR Goldbox series of PC games.

I still have the big collector's box with 5&1/4" discs of Hillsfar, Dragons of Flame, Heroes of the Lance, War of the Lance (one of the best ever turn based strategy games), Pool of Radiance and Curse of the Azure Bonds plus many other gold box and Eye of the Beholder games. Man I loved those AD&D games.

I've also got dozens of FR, DL, RL and DS novels. I've not read them for the past maybe 8 years or so and have always meant to go back and re-read them all as well as collect the new ones but too many other books get in the way...

Ahhh thanks for bringing back the memories Adam.

TSR and WotC published other D&D settings worthy of note: Ghostwalk, the Jakandor series of supplements, and historical Earth (including Celts, Rome, Charlemagne, etc.). The Conan modules with Schwarzenegger on the cover were pretty light, but these others were fairly substantial.

Jebus, do you know if there is any D&D games for any console other than the PC?

If Jebus doesn't mind me answering, there are two (I think) BALDUR'S GATE games for the PS2, but they are action games and are not based on the D&D rules. KNIGHTS OF THE OLD REPUBLIC 1 and 2 on the X-Box were based on the D20 rules derived from D&D 3rd Edition, and are probably the closest things out there.

The new BioWare game, DRAGON AGE, which is out in a few weeks on PS3 and 360, is a 'spiritual successor' to the BALDUR'S GATE D&D games but uses a different rules system.

Cool! I used to RP in Greyhawk most of the time and I RPed a few times in Al-Qadim. Brings back good memories... Anyone knows a good hosting site where to play e-mail/forum based RPG online?

There was a downloadable conversion chart released for 2E-3E at the time 3E came out.

4E is just too different. Too many of the basic, underlying principles of the game have been completely changed so no conversion is really possible. The designers themselves said that the games are incompatible and if you wanted to play 4E you had to finish your 3E campaign and retire the characters before rolling up some new ones..