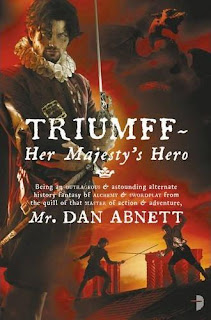 Sir Rupert Triumff, lately returned from a mission of discovery in which he discovered a land named Australia, is a noted adventurer and consumer of alcohol. Curiously reluctant to make a formal report to the Queen about his newly-discovered continent, Triumff is soon drawn into an attempt to thwart a murky conspiracy with a most foul goal. For the safety of the country, Triumff has to go undercover, aided by allies unlikely and most redoubtable, as he attempts to discover who is planning to use sourcery most foul to endanger the life of the Queen...

Triumff: Her Majesty's Hero is the first original adult novel by noted comics and Warhammer 40,000 author Dan Abnett. One of the launch titles for HarperCollins' new imprint, Angry Robot, Triumff is a flamboyant alternate-history story with elements of George MacDonald Fraser's Flashman books mixed together with a slice of Blackadder and left to simmer over the stove of Very Bad Puns.

Abnett has created a rollicking world (neo-Elizabethanpunk?) which is basically a mash-up of our own and that of the Elizabethan period. Gentlemen fight duels of honour, but may choose to employ Swiss Army swords (which have an unfortunate habit of replacing the sword blade with a potato peeler at inopportune moments during combat) in lieu of a standard rapier. Firearms are around, but still relatively primitive, whilst those versed in the Arte may employ significantly more powerful magical weapons as well.

Triumff himself is a splendid hero, a colourful man of action perhaps a little too fond of the bottle but generally out to do the right thing. Interestingly, whilst the central character he does not exist in a vacuum and a number of other major characters feature throughout the book, such as Mother Grundy the witchlock (independent witches and warlocks have been outlawed, but there's a loophole), Triumff's girlfriend Doll, a 'noble savage' named Uptil who is more than he seems and the book's narrator, Wllm Beaver, esq, a stalwart fellow whose assistance to our heroes is laudable but who also suffers from perspective confusion (unsure whether to refer to himself in the first or third person, and settles for both, to much hilarity).

Events unfold at a rattling pace, although rather than charging straight through the reader is advised to savour the comical lines, the almost-missed references to movies and other stories and the increasing prevalence of puns, which at times arrive at such a velocity that they batter the reader's cultivated stoicism to such a degree that they must eventually surrender and find themselves laughing to references to a religious order named the Exeter Terrestrials and a young London musical artiste known as the Diseased Rascal.

The book ends on a triumphant note with a promise that Sir Rupert Triumff will return for further adventures, which I find myself looking forwards to immensely.

Triumff: Her Majesty's Hero (****½) is a superior slice of amusement and is available now in the UK from Angry Robot. Those of a Colonial persuasion can enquire for copies via Amazon. The author has a blog here, and will be signing copies of the book at Forbidden Planet in London this coming Saturday.
Posted by Adam Whitehead at 22:23

The fact that I chuckled at the "Colonial persuasion" is probably a good sign I should read this book. :-)

Yes, the book is set in an alternate-history 2010.

Why not 2009? I have no idea. Presumably the author thought it might be coming out in 2010 and wanted to make it as contemporary as possible.

How does it compare to the likes of Abercrombie's novels? It sounds like the tone of the story is somewhat like that.