In the all-to-near future, the European Union is well on its way to becoming a single federalised state. Unfortunately, due to the passing of Article 13199 of the Pan-European Constitution ("No person shall be prejudiced from employment in any capacity, at any level, by reason of age, race, creed or incompitence,"), the continent is grinding to a halt. One detective is assigned to track down a dangerous killer, but finds his investigation complicated by blind nightclub bouncers, octogenarian male lap-dancers, priapic train stewards and airline ticket salesmen with attention disorders. 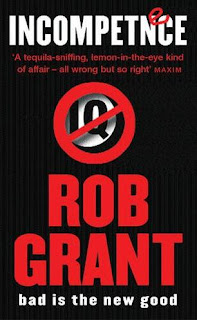 Incompetence, originally published in 2003, was the second original novel by Rob Grant, better-known to many SF fans as the co-creator of Red Dwarf. One of Grant's favourite topics, shown sporadically in Dwarf but reaching a kind of insane art form here, is the sheer, mind-numbingly unbelievable insanity that bureaucracy is capable of. Obviously the EU, with its perchance for fining corner-shop greengrocers who sensibly refuse to use measurements its customers find incomprehensible thousands of pounds for each infringement, is a tempting and irresistible target for his humour.

The result is a book driven by the type of comedic raging fury of the kind that Basil Fawlty would have channeled should he have ever chosen to write a novel (although this would be an admittedly difficult task for a fictional character) about the European Union. Our 'hero' is on the trail of a deadly killer but the case is interrupted by every five minutes by increasingly bizarre and convoluted brushes with EU law or regulations. He hires a car, but in the interval between hiring it in the office and crossing the parking lot to where his hire-car is waiting for him, it's been clamped for being parked in the wrong place. Trying to get on a train takes 22 pages of insane, and at times life-threatening, wrangling. The police attempt to stop a runaway car but can't come up with a way of doing it effectively so end up deploying anti-tank weaponry. And so on.

It's a very, very funny book. The laughs start on the first page and don't stop until the last. And it's not even as if the author is really succeeding at making a serious point about the EU. The situations the main character finds himself in are so insanely over-the-top they will almost certainly never happen, although there's a few that do seem somewhat plausible (like the one about the old guy who is accidentally declared dead and his wife receives a fat cheque from the government, so they decide to keep up the pretense he is dead).

In addition to the non-stop comedy and satire, there are a few nice moments of understated writing as well. There's a blink-and-you-miss-it moment towards the end where our (unnamed, by the way, I haven't just forgotten what his name is) protagonist proves how competent he is, even if the rest of Europe isn't. And to be honest the main, more serious plot is never really given a lot of time to develop, due to the constant misadventures and brushes with bureaucracy along the way.

But that's not too much of a problem. Incompetence (****) is extremely funny from start to finish and constantly entertaining. The book is available now in the UK, but unsurprisingly not in the USA (possibly for fear that Americans would accept it as a serious and well-informed factual book about the EU), although Amazon.com has some import copies available.

I talked to Rob Grant at the Gollancz Autumn Party and he informed me that this book is being adapted as a stage play by a Swiss (I think) company. How on Earth they'd do the book on stage I'm not sure, but it would certainly make a superb movie or TV series at some point.
Posted by Adam Whitehead at 15:48

A common measurment system for all EU sounds pretty sensible to me, that one have to use the law to get certain countries to make it the common system is unfortuently necessary when dealing with human beings :)

I did actually miss the mentioned blink-and-you'll-miss-it moment the first time... got well confused for a few seconds after.