Greatest RPG ever made re-released

In a totally unexpected move, Interplay are about to re-release Planescape: Torment, which has an excellent claim on being the single greatest computer roleplaying game ever made. Easily the closest gaming has ever gotten to 'real' literature, Torment is a complex and morally ambivalent game about an enigmatic central character who cannot die and has to uncover his past. The setting is the wondrous Planescape multiverse from 2nd Edition Dungeons and Dragons (look out for its eventual appearance in the 'Worlds of D&D' feature), the most original setting that D&D has ever produced, where ideas and ideology can shape the very nature of reality. The game is notable for not focusing on combat and putting the characters and their thoughts, conflicts and ideas front and centre, with over 400,000 words of dialogue and description making up the game. 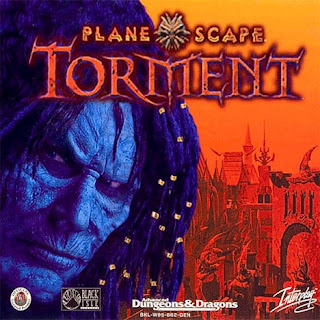 Torment was produced by Black Isle by much of the same team that worked on the first two Fallout games and would go on to make the Icewind Dale duology before going bust and reforming as Obsidian, creators of Neverwinter Nights II and Knights of the Old Republic II. Originally released in 1999, the game was overlooked somewhat by many gamers at the time (although it went on to sell a solid half-million copies) but has become a major critical darling in recent years, frequently placing high in 'Best Game Ever' polls. This strategic, Vista and Windows 7-compatible re-release will hopefully introduce it to a new generation of gamers.

The most eyebrow-raising part of this is the price: a ten-year-old game for £17.99? Seems a bit much. I'd be tempted to say hang on for a while and see if it drops below a tenner, but then again it is seriously one of the very best computer games of any genre ever made, so at that price it is still reasonable, if you can withstand the old-school graphics (and there are plenty of mods out there which can improve the resolution and interface).

Simultaneously, you can also get the almost-as-awesome Anachronox from Amazon for £4, which is a total no-brainer.
Posted by Adam Whitehead at 00:12

Cool news - as a huge fan of the Baldur's Gate and Icewind Dale games, I was always disappointed never to have played this one.

Any idea whether it will be compatible with Windows ME? My PC is quite old and doesn't have Vista or 7...

I imagine so. I played BG2 and Icewind Dale on ME and never had any problems and this uses the same engine.

I think I just died a little on the inside.

I've always wanted a sequel to Torment (not plot-wise, necessarily, just more Planescape), but the low numbers originally seemed to doom that idea. Hopefully, if critical acclaim and nostalgia can translate into promising sales for the re-release, somebody might see the virtue in making a new game...

I read an interview with Chris Avellone in which he said quite firmly that there is no way on Earth any publisher would take a chance on TORMENT now. Too original, too radical, too avant-garde a concept to be commercial. TORMENT was successful back in the day, but with the realities of marketing and publishing costs now, it probably wouldn't have worked.

PLANESCAPE itself does not exist any more, as it's been folded into core D&D 4th Edition, so it would also require a new and probably expensive license to make it work as well.

I think this calls for another two Wertzone Classics reviews (Planescape: Torment and Anachronox).

Also, while we're on the subject of Windows ME:

They will come in time. Actually, last time I tried ANACHRONOX it just kept crashing in the same place. I think I've solved that problem so hopefully that's going to be one for next year.