Three centuries after the war between the Crayven Corporation and the Order of the New Dawn for control of Krig 7-B, another battle is raging for control of a world on the edge of human space. The corporations were long ago consolidated under a central authority known as the Terran Empire. The Empire has gradually absorbed all the colony worlds one by one, until now the sole remaining stronghold of resistance is Morningstar Prime. Captain Jacob Angelus is tasked with the by the Northern Star Alliance with the task of holding Morningstar against increasingly powerful imperial forces led by Imperator Vlaana. 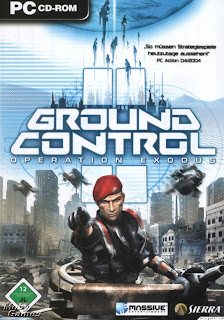 As the siege of Morningstar draws tighter, the enigmatic alien Virons enter the fray. Driven by an internecine conflict, different factions side with the two sides on Morningstar, and Angelus learns of a way that he can save the people of the planet. But it involves a long and dangerous mission into the Ragnarok Nebula, to a long-forgotten world called Krig 7-B...

Ground Control II, originally released in 2004, is fairly obviously the sequel to Ground Control, the classic real-time tactics game. GC2 picks up the story centuries further on and it initially appears that there is no relationship between the two games, save being set in the same universe. However, as the game continues it becomes clear that the events of the original game set in motion a chain of events that are now coming to fruition, and a new generation of heroes must complete the work begun by Major Sarah Parker and Deacon Jared Stone in the first game.

There are, however, some significant differences between the two games. Ground Control was excellent because it strictly limited the military forces available to take into battle, putting the emphasis firmly on tactical decision-making, battle formations and picking the opportune route across the battlefield. With no ability to save mid-mission, the game encouraged genuine tactical decision-making rather than quicksaving and then hoping for the best. Whilst for hardcore strategy fans this was good stuff, more casual players were put off by the game's rock-hard reputation, despite fantastic reviews at the time.

GC2 is, by contrast, far more commercial. You can save mid-mission and you can reinforce your army in the field at any time through the seizing of landing zones and the deployment of dropships. Destroying enemy forces, seizing 'victory locations' and achieving objectives earns you points you can put towards recruiting new units or upgrading the dropship. You can order the dropship to remain on-station after delivering units and use it as a gun platform or a scout before it runs out of fuel and has to return to base. This is actually a pretty clever idea, and it's not unusual for the success or failure of a mission to turn on how you outfit and deploy the dropship effectively.

You control both the NSA army and a Viron taskforce during the two campaigns. Both sides are well-developed and fun to play, but the Virons take the edge for ingenuity and originality. They are based on organic technology and have both secondary modes granting them different skills and the ability to 'meld' two units together into a more powerful one. Playing as the Virons offers superior tactical possibilities and a greater variety of units and tactics.

Unfortunately, the addition of the in-mission saves means that getting through missions is sometimes more a question of stubbornness and reloading than using genuine tactical skills. The game creators minimise this as best they can by making the missions quite challenging and not having a quicksave key (you have to go through the menu), encouraging more experimenting with unit combinations and formations.

Graphically, the game uses a very similar engine to the original GC, although the maps are not quite as insanely huge. Obviously for a game that's four years newer, the graphics are notably better than the original game (which still had very impressive graphics for a game released in 2000), but the UI is, curiously, a lot more restrictive than the original. The viewing area of the screen is reduced by at least a third due to a fancy border and lots of unnecessary buttons you never use, standing in contrast to the smooth, streamlined and (ironically) far more modern interface of the first game.

The game has an excellent storyline with some really good twists and turns, and the characters are a pretty cool bunch. Their desperate struggle against the odds is compelling, although sadly incomplete: the game ends on a cliffhanger with a number of questions left dangling. Although the primary story arc of the game is complete, the fate of several key characters is left up in the air. It is clear that Massive were going to release either a third game or an expansion to address these elements, but the relatively mediocre commercial performance of GC2 meant this did not happen. Massive went on to develop World in Conflict and its recent expansion for a different publisher, and it sounds unlikely there will be further Ground Control games, at least not in the near future.

Ground Control II is a fast-paced and very satisfying real-time strategy game, with frantic combat, excellent graphics and sound (the game has aged very well indeed) and a challenging difficulty level. However, the commercialization of the game means that some elements of uniqueness from Ground Control have been lost. The game is rather more traditional and less ambitious than its forebear. Still, it remains a very fine example of the RTS genre and was a notably superior game to Dawn of War, which came out several months after it and used some similar ideas, but to weaker effect.

Ground Control II (****½) is a very satisfying and enjoyable RTS, and if it disappoints it is only in comparison to its excellent forebear. The game is available in the UK via Amazon, but a better and cheaper options is to get the game (fully legally) from the GoG website, where its currently available for just $6.
Posted by Adam Whitehead at 00:59