Another major epic fantasy comes to an end

What with all the excitement over the imminent release of the next Wheel of Time novel (not the last one, but the beginning of the end), it's probably been totally overlooked by many that another, long-gestating fantasy cycle is also approaching its final volume. 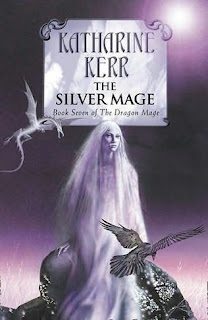 Katherine Kerr's Deverry Cycle is a vast, interlinked series of novels spanning several sub-series and centuries of time. The first book, Daggerspell, was published back in 1986. The fifteenth and final volume in the series, The Silver Mage, is released on 29 October 2009 in the UK and about a week later in the USA.

I've never read the Deverry Cycle, although I've considered it several times. The series is intriguing as it focuses on the same group of characters who live, have adventures, die and are then reincarnated as a new person decades or centuries later, with many flashbacks to prior incarnations (this chart is handy for keeping track of them). Kim Stanley Robinson's 2002 stand-alone novel The Years of Rice and Salt uses a similar device in a single novel, whilst Wheel of Time touches on the reincarnation device as well.

To commemorate the release of the final book and celebrate the series and its characters, this LJ community has been set up. 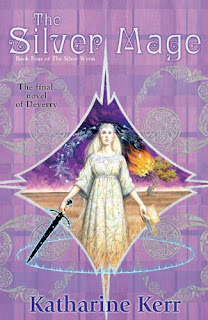 The Deverry novels are as follows:

* Slightly confusingly, the UK publishers count The Dragon Mage and The Silver Wyrm as a single seven-volume arc rather than two smaller series, as appears to be the author's intent.

With the series now complete, it is now looking a lot more tempting to read, so I may give it a go some time in the future.
Posted by Adam Whitehead at 22:29

Together with Janny Wurts, Katherine Kerr is one of my favourite fantasy writers. I remember being blown away by Daggerspell when I first read it all those years ago. So give it a go, it's brilliant.

If handy, I have some reviews of the books up to the final volume on my blog - I am awaiting arrival of The Silver Mage and will post my thoughts when done!

Maybe I'm a fossil but I want to start reading Daggerspell in February 2010.