Shortly after the release of Fallout 3's three initial downloadable expansions, Bethesda announced that two more were in the planning: Point Lookout and Mothership Zeta. Both games are 'plug-ins'. After installing them you get a new radio message informing you of radio messages that lead you to locations where the new quests begin. Annoyingly (especially so in Point Lookout's case), you can't bring followers with you, so it's a good idea to dump them before beginning the quests. 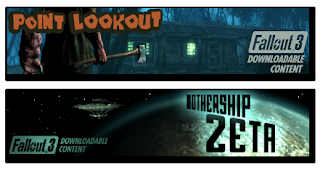 Point Lookout (****) sees a ship arriving on the Potomac with news of trouble in Point Lookout, Maryland, a swamp community some miles from DC. Arriving at the location, you are drawn into a conflict between two neighbouring communities. There are also a number of different side-quests to undertake, and a significantly large area (one-sixth the size of the gigantic main map from FO3 itself) to explore. Because this expansion replicates the free-roaming nature of FO3, the limitations meaning you can't bring a companion with you is rather inexplicable and annoying. That said, the free-roaming nature of Point Lookout works in its favour, and is truer to the spirit of Fallout than the linear missions of Operation Anchorage and The Pitt. The demented Deliverance-style hillbillies armed with insanely lethal weaponry (at high levels the enemies on this map pose quite a challenge) also make a fine addition to Fallout's arsenal of crazy influences. Overall, this is a very satisfying expansion, but it was also the one I found to be the most unstable, with occasional crashes to desktop and sometimes the screen going totally black, forcing me to quit out.

Mothership Zeta (***½) is the final downloadable episode for the game and is probably the most individual. Investigating an SOS from the Wasteland, you find a crashed alien spaceship. A rescue vessel arrives and you find yourself 'abducted' in the classic X-Files format and have to undergo a 'probing' from first-person viewpoint (luckily you pass out before having to see anything too weird). You learn that the aliens have been abducting people from throughout Earth's history and freezing them, and as you attempt to flee the vessel you amass quite an array of companions, including a cowboy and a samurai (who doesn't understand anything that's going on, but is handy with a katana). You have to make your way through the ship, disabling a 'death ray' which is going to incinerate the Earth along the way, and take out the alien captain before you can return home.

It's very silly and it also has to be said, very linear, possibly even moreso than Operation Anchorage. It is entertaining throughout, however, and you have to respect the work Bethesda put into this one, creating a completely new art style for the alien ship and designing a number of new enemies, NPCs and weapons completely from scratch, with very little reused from the existing Fallout 3 art and technical assets. It is also a little too easy, especially since you regain all of your high-level gear you were stripped of upon abduction within a few minutes of waking up on the alien ship. The puzzles are not particularly challenging, although some of the writing and dialogue is quite strong by Fallout 3 standards (particularly the moments when your various companions learn that the Earth is a burned-out, post-apocalyptic wasteland). You can also revisit the spaceship and your new friends at will once the mission is completed, which is nice but not particularly of value.

Completing Mothership Zeta means the final completion of Fallout 3 itself. Amusingly, the last thing I did before returning to my house in Megaton and hanging up the old gatling laser and power armour for good was randomly bump into Dogmeat (the canine NPC most players meet and recruit about five minutes after leaving the vault at the start of the game, but I'd somehow completely missed and then gone through 90-odd hours of gameplay with never meeting him) and taking him home with me.

The two expansions are available now via Microsoft's Games for Windows Live website or on X-Box Live. They'll be available on the PS3 Network in the next few weeks, and will be included in the Fallout 3 Game of the Year Edition for all three formats due in a few weeks as well. Obsidian Entertainment, including several writers and designers from Fallout and Fallout 2, are currently working on Fallout: New Vegas, a new, stand-alone game using the same engine, for release in late 2010.
Posted by Adam Whitehead at 19:35