And so it begins.

Filming of Game of Thrones got underway this morning at Doune Castle in Scotland, which is being used for the exterior and some interior scenes in Winterfell. Several of the actors, including Peter Dinklage as Tyrion Lannister, were apprently filming today and at least one of the wolf pups - a white-haired one, almost certainly Ghost, Jon Snow's direwolf - was around as well, suggesting the first scenes being shot will include the Tyrion/Jon Snow/Ghost scene in the courtyard. It sounds like establishing shots may have also been shot earlier in the week, whilst Sean Bean and other castmembers are not expected until later in the week, possibly for the scenes where the king's party arrives at Winterfell and maybe the grand feast as well. 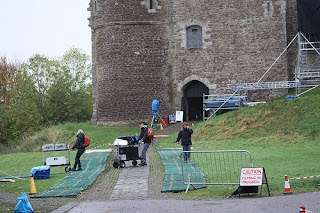 Filming will also be carried out at the Paint Hall studios in Belfast in around a week and a half's time, and will move on to studios and locations in Morocco for the Daenerys scenes later in the month. Filming is expected to take place for another four to five weeks or so.

It may have felt like a long road to get here, but actually it was only two years ago that HBO optioned the series. It is much more normal for a potential TV or movie series to stay in development hell for a much longer period of time or have far more hiccups on its way to production. The Wheel of Time series, for example, seems to be on its second option in eight years and this one doesn't look like progressing very far in the near future either. A Game of Thrones, on the other hand, seems to have had an easier time of it. Of course, so far only the pilot remains in production. We likely won't know if HBO is ordering a full season for another 2-4 months or so, but even if the project does not proceed any further, watching the process of a book getting on screen in unusually close detail has nevertheless been fascinating.

Good luck to everyone involved in the project. I'll be in Belfast on 3 November for GRRM's book signing and, will report back with any choice information or photos I pick up ;-)
Posted by Adam Whitehead at 18:43

Email ThisBlogThis!Share to TwitterShare to FacebookShare to Pinterest
Labels: a game of thrones (TV series), a song of ice and fire, george r.r. martin, hbo, winter is coming

exciting! I have the first book in my TBR pile, must read it before the film comes out.

Not trying to be one of those snarky, "when is the book coming out" types, but I wonder if Martin wasn't expecting it to go this fast. If they do a book per season, every year or so, the series is going to catch up to the books pretty fast. Obviously that's way down the road, but if the series makes it, it could be awkward if Martin keeps up his 1 book every 5 years pace.

HBO do not produce a season a year like other television companies. For example, it took nine years for six seasons of THE SOPRANOS to be produced. ROME's first season aired in mid-2005 and its second in early 2007.

Based on that schedule, say one season every 18 months, they wouldn't get to Season 6 until the middle of 2018 and Season 7 until potentially 2020. Even assuming Books 6 and 7 take another five years each, they should be okay.

The problem comes in with the ages of the children, since the younger children will age a lot in that time and whilst recasting is an option, that could also be problematic if the fanbase have grown attached to the actors. In addition, the long gaps between seasons is something HBO appears to be trying to eliminate, with a much more regular schedule for their newer shoes like TRUE BLOOD.

Of course, for the show to get to a sixth season, it would have to be a huge, popular smash hit on the level of TRUE BLOOD, THE SOPRANOS and SEX AND THE CITY. Basically, it's a problem that HBO would love to have ;-)

Adam, I'm sure I could find this with a quick google search, but since I'm lazy, do you know who happens to hold the option on the Wheel of Time? It seems like WoT would work better as a series of movies than a television series, but the length of it would be prohibitive.

Red Eagle Productions are currently developing the project for Universal.

It's all gone quiet for a while though, and I'm guessing they're grappling with the same problem: too long to be a film series, way too many effects for it to be a TV series.

I hope the Wheel of Time never gets made. Unless the script writers take great liberties to make it better than the convoluted mess Robert Jordan made of it. Which wouldn't be difficult. - Ian

The best way to do Wheel of Time on screen would probably be to do Eye of the World, Great Hunt and the Dragon Reborn as a trilogy and tweak that to make it a self contained story. Rand vs Ishamael in the Stone would make a solid enough conclusion, even if the rest were never made.

That would be one possibility. TV series is the other. You could do it as six seasons:

The only problem is that you'd need about 20 episodes a season to do that, so it would have to be a network or the Sci-Fi Channel, and in both cases the budget probably wouldn't be big enough.

Servant of a Dark God By John Brown

I don't know if it will ever be made into a movie but I loved the world and the concept so I would love to see it on screen.

Check it out and then go ahead and thank me for it later :)

I'd like to see a screen adaptation of Steven Erikssons "Malazan Book of the Fallen" series.