Harmony Gold and Manga Entertainment have come to an agreement to allow the 1980s series Robotech to be streamed on Hulu and YouTube. 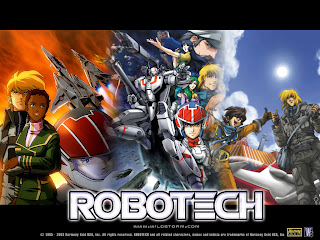 Robotech is an amalgamation of three separate Japanese anime series, Super Dimension Fortress Macross, Super Dimension Fortress Southern Cross and Genesis Climber Mospeada. They were combined and edited in 1985 to form one story taking place over three generations. Robotech is often credited (along with the 1988 movie Akira) with beginning the anime craze in the West which continues to this day, although fans of the original, unaltered anime series are unimpressed with Harmony Gold's blocking of the release of the three original series and their various sequels and spin-offs in the USA and other territories. Nevertheless, Robotech retains a large and loyal fanbase to this day.

The story opens in (a now-alternate-history) 1999 with the world engaged in the Global Civil War, which comes to an abrupt end when an alien spacecraft crash-lands on a remote island in the South Pacific. The governments of the world unite to exploit the alien spacecraft's technology and eventually rebuild it as the SDF-1 (Super Dimensional Fortress), the centerpiece of a new military force designed to explore space and defend against more of the aliens should they appear. Sure enough, the aliens - 60-foot-tall humanoids called the Zentraedi - show up in 2009 and attack the Earth, but seem more interested in capturing the SDF-1 intact. The battle fortress attempts a hazardous hyperspace jump to outflank the alien fleet, but instead is warped to the vicinity of Pluto (where the hyperdrive burns out) and has to undertake a hazardous two-year voyage back to Earth. This does have the advantage of drawing the Zentraedi away from Earth. In the meantime the crew of the SDF-1, led by Captain Gloval, learn more about the Zentraedi and their urgent need to capture the vessel undamaged, including the fact they are vassals of a much more powerful and enigmatic race called the Robotech Masters. The series culminates with the SDF-1's return to Earth and a final showdown with the vast main Zentraedi fleet.

The subsequent two series pick up the story some two decades later and chart a new generation of humanity's encounter with the Robotech Masters themselves and then the Invid, a race with whom the Masters and the Zentraedi have been at war with for many generations, whilst the original characters have taken the battle into deep space. A recently-commissioned TV movie, The Shadow Chronicles, combines characters and storylines from all three series to resolve the plot threads left hanging from the original series, and a further animated film, Shadow Rising, is in the planning stages.

Robotech has sold vast numbers of DVDs, comics and merchandise over the past 25 years. A series of twenty-one novels written by Brian Daley and James Luceno (who would go on to co-create the Robotech-flavoured New Jedi Order series of Star Wars novels) under the pen-name 'Jack McKinney' has also proven popular, mainly due to the authors being able to smooth over the cracks and continuity issues between the different TV series and produce a more coherent story, complete with 'bridging' novels that linked the different time periods together more effectively. The novels had a notably different ending, which the new TV movies seem to have ignored in favour of extending the storyline.

A live-action Robotech film is also in the planning stages, with Spider-Man actor Tobey Maguire hoping to produce and possibly star in the film, which has reached the scripting stage.

The Macross Saga, Robotech Masters and Shadow Chronicles can currently be viewed on YouTube and Hulu. Mospeada is expected to follow shortly.
Posted by Adam Whitehead at 16:24

Brilliant show. I have the first series on DVD and have been meaning to get the second 2. Also I had two X-Box games that were awesome as well.