FOUNDATION to become a movie

Director Roland Emmerich was recently announced to be developing a movie based upon the Foundation novels by Isaac Asimov, in particular the original trilogy of Foundation (1951), Foundation and Empire (1952) and Second Foundation (1953). Originally it appeared the project was doomed to development hell, but Emmerich recently announced the film will be his next project after his current film, the William Shakespeare movie Anonymous, wraps up (his previous movie, 2012, hits cinemas in a few weeks). 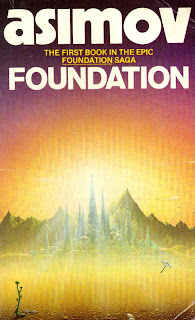 The news is of concern: Roland Emmerich is the director of Stargate, Independence Day, Godzilla and The Day After Tomorrow, movies noted for having tons of special effects and having things explode, sink or be cataclysmically destroyed (usually New York) with thousands of people killed. He doesn't do 'quiet', although Anonymous appears to be a brave attempt to tell a character-driven movie, although I'm not ruling out Emmerich somehow causing Elizabethan Richmond to explode in slow-motion with a dog successfully outrunning the blast by turning down a corridor at right-angles to the blast and thus surviving due to the director's ignorance of ballistic reality. But you never know.

Emmerich seems to get off on the right foot by agreeing that the recent film version of Asimov's I, Robot was rubbish, had nothing to do with the book and his approach would be a faithful adaptation of the Foundation Trilogy (the continued popularity of this term suggests the existence of the latter four books seems to have been forgotten by a lot of people at this point). So how was he going to faithfully adapt a series of episodic stories featuring radical shifts in cast and geopolitical situation across some 400 years of future history? Well, he's going to merge all the events into a shorter period of time and all the separate protagonists will become one character.

You don't have to be Hari Seldon to accurately predict that this will not end well. And I'd put money on Trantor being destroyed in a slow-motion, skyscraper-tumbling firestorm at some point as well.
Posted by Adam Whitehead at 22:59

Poor Asimov, he is rolling so fast in his grave, it's disturbing earth's magnetic field

The latter four were:

That's not counting all the other FOUNDATION books not written by Asimov, of which I think there are at least four.

"Trantor being destroyed in a slow-motion, skyscraper-tumbling firestorm"

Oh wow neat! Just like Vulcan only better. And don't forget the "car chase" scene. We need one of those as well just like I, Robot had. And a bunch of sex scenes too. Maybe they can get that chick from Transformers to star in this. She probably doesn't have anything to do until Transformers 3 comes along anyways. I'm sure that any script writer should be able to modify Asimov's story to soup it up a bit and accommodate all these changes. Yeah, really looking forward to this.

In the right hands, still would be a difficult movie.

Indeed. There was also the appallingly-titled 'Foundation's Friends', a series of short stories involving the Foundation written by other authors. That was never published in the UK though.

"Foundation's Friends" is actually a collection of stories written in tribute to Asimov. Only 2-3 of them deal with the Foundation proper. Orson Scott Card wrote "The Originist" delving into some of the thought behind setting up the Second Foundation. There's also a story detailing the Fall of Trantor. (Should probably keep Emmerich away from that one!)

I like to think that the dog survived because it was alien fire and therefore could only travel in a radial pattern saving the labrador.

There is only one man in all of Hollywood that is right for this movie. It's Steven Speilberg. Why? Because of AI. AI was so deep and emotional. The problem with the movie for most people(except me) is that it lacked action. Foundation would have action. Speilberg would have the pull to get all four movies done and could show just what Seldon was terrified of and make you believe in each movie. I am pulling for him. Any other person in change the story and destroy it's meaning like...X-Men, and Anne Rices' stories and many other great ideas that Hollywood has totally got wrong.