When a fairy godmother learns she is about to die, she realises she must pass her vital mission onto a wise and respected witch to complete. Unfortunately, the only witch on hand is Magrat Garlick. Suddenly given an onerous and responsible quest to undertake, Magrat is soon off on a journey to the distant city of Genua, accompanied by Granny Weatherwas, Nanny Ogg and the latter's psychotic feline companion Greebo. 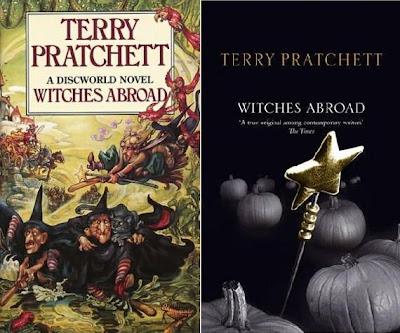 As they calve a trail of mayhem across the continent, they learn that in Genua all the stories must have a happy ending. Whether the people involved want one or not...

Witches Abroad, the twelfth Discworld novel, is the second novel to focus on the Lancre witches (and the third to feature Granny Weatherwax). With Lancre recovering from the events of Wyrd Sisters, Pratchett decides to take the witches off on a jobbing holiday. This neatly divides the book into two halves: the first covers the witches' journey from Lancre to Genua via various castles, villages, dwarf mines and boats and run-ins with wolves and vampires, whilst the second covers events in Genua. The former is highly enjoyable, if rather episodic, whilst the latter is rather cleverer, featuring a Discworld spin on the legend of Baba Yaga and is basically Sleeping Beauty and Cinderella mashed up and set in New Orleans. This works a lot better than it may sound.

Pratchett's grasp of character, humour and pacing is as expertly-handled as ever. The characters of the three witches continue to expand and be explored in greater depth (Nanny Ogg in particular benefits from a deeper exploration of her character) and whilst Pratchett is on familiar ground here, exploring the idea of myth and stories, he still comes up with some great ideas. He even has a - somewhat uncharacteristic - 'twist' in the ending which is unexpected and works quite well. 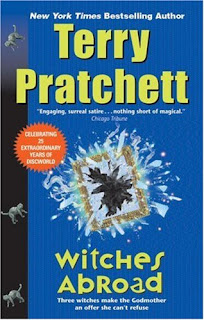 On the negative side, there is a rather artificial plot device designed to raise tension where Granny Weatherwax refuses to tell the other witches what's going on, even though there is no real reason for her not to. An interlude in which Greebo becomes briefly human also appears to be there only because Pratchett thought it would by funny to see Greebo as a human (as indeed it is) rather than because there's a real reason for it in the plot.

Still, these are not major issues in what may be very much a typical Discworld novel, but still a good read. Also watch out for the debut of Casanunda, master swordsman and both the World's Greatest Liar and its Greatest Lover (stepladder-assisted).

Witches Abroad (****) is a solidly entertaining and decent entry to the Discworld series, although it isn't its most exciting instalment. The novel is available now in the UK and USA.
Posted by Adam Whitehead at 23:08

Well. To be honest: It's MY favorite from all the Discworld books! It's just hilarously funny, if you're into fairy tales!

I haven't yet read a terry pratchett novel but the the popularity of these books is amazing. What do these books compare to like in terms of other major fantasy works and authors? I'd be thankful if someone could inform me.
Are these for children???
Yes, I am a completely ignorant bufoon; at least as far as this author is concerned!!

The Fantasizer - they're not for children at all, they're often social commentary caged in humourist fantasy where only adults would get a lot of the jokes. I started reading them as a teenager and have never looked back.

Pratchett has written some children's books, but the main DISCWORLD series is not aimed at them. Some of the content is fairly advanced, and he explores some more serious ideas and themes in some of the books that kids wouldn't really get (the next book in the series is about fundamentalist religion and blind faith, for example).

In terms of his overall genre importance, it is pretty big. Some have called him the greatest living fantasist and I think there is an argument for that. The only serious contenders to that crown would really be Gene Wolfe and Jack Vance. Few authors have the huge output of Pratchett combined with his general high quality and the variety of ideas, styles and characters he explores, both in and out of the DISCWORLD books.

He also has, unusually, a lot of mainstream respect, and has been called the modern Charles Dickens by several critics, a label that has stuck. His high output has led him to being taken for granted, but his recent illness seems to have woken people up to the fact that he's a national treasure that won't be around forever, and we should savour the new works that he will be able to produce over the next few years.

Thanks Jebus and Adam. I'll make sure that I check out Pratchett's books as soon as possible, thankyou for your kind help.

By the way Adam, I discovered your blog a few months ago and have been visiting it nearly everyday. Your blog rocks keep up the good work!!