DEATH RAY to come to an end

British science fiction magazine Death Ray is to cease publication after its 21st issue (October 2009). The news broke today that due to the credit crunch and the separation of the magazine's publishers, Blackfish, from their parent company, Rebellion, it was no longer viable to carry on with either Death Ray or its sister magazine, Filmstar. However, there is a very slim ray of hope that another company may pick up the magazine, or the publishers may be able to remount publication at some point in the future. 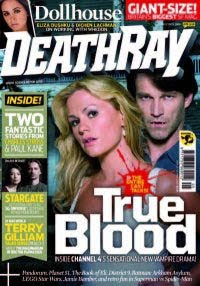 Death Ray launched in May 2007, just one month after Imagine Publishing's SciFiNow. The near-simultaneous launch of two new SF magazines was a surprising move, since Future's SFX had been the sole science fiction glossy magazine on the shelves for some considerable time, whilst two older SF titles, TV Zone and Starburst, had both folded in 2008.

Generalising greatly, of the three titles Death Ray was arguably the most in-depth, featuring a greater emphasis on SF literature than other media. The last few issues also featured some original fiction, including a new Revelation Space story by Alastair Reynolds. However, Death Ray's release schedule had become somewhat erratic, with the magazine switching from a monthly to a quarterly to a bimonthly format, leaving readers unsure when a new issue was going to appear. It also suffered sales-wise, and failed to achieve as large an audience as the considerably more lightweight SciFiNow or the more established SFX.

This is sad news. Whilst Death Ray never became a must-buy magazine for me, it looked like it was heading in a very interesting direction when it folded, and leaves the British genre magazine market poorer for its absence.
Posted by Adam Whitehead at 18:55